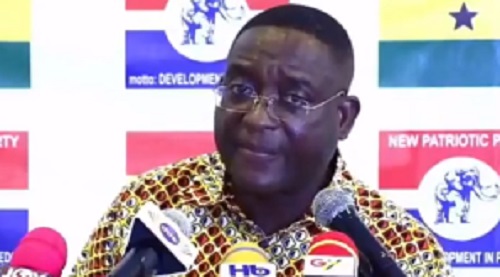 Yaw Buaben Asamoa, Communications Director of the NPP and MP for Adenta Constituency says the government has already published its audit report on cocoa roads.

Speaking at a press briefing of the party in Accra, Yaw Buaben Asamoa said calls by John Mahama for government to publish audit report on cocoa roads are unnecessary because the report has already been published.

"He is asking the government to publish what is already published."

Yaw Buaben Asamoa said the NDC government during their tenure in office awarded road contracts which were not part of cocoa roads.

He stated that contractors who were working under the former administration and had genuine claims were paid.

John Mahama has called on the government to publish the audit report of cocoa roads.

The Mahama administration was accused of awarding over 230 road contracts to the tune of GHS3.5 billion under the cocoa road project to the detriment of COCOBOD’s finances.

The New Patriotic Party government, therefore, halted the construction of the cocoa roads across the country in 2017 over corruption concerns.

Speaking at Bopa as part of his tour of the Western North Region, the former President dared the government to produce the said report adding that the government has deliberately started reconstructing the roads few months to the election for political gains.

“They abandoned the projects because of sabotage and politics. Because they realized we are close to elections, they have started work on the roads again. I want to know where the audit report is. I am here at Bopa asking the NPP government to publish the audit reports on cocoa roads for everyone to see.”

“The laws of Ghana indicate that if a government starts a project and loses the elections, it is incumbent on the next government to continue with the projects. But this is not what we are seeing. When the NDC was voted out of power, there were a lot of contractors working on projects, but when this government took over, they halted all of them, saying it was auditing them. It has been four years now and I believe that even if it was the Bible we were reading, we would have covered from Genesis to Revelations by now,” he added.

Mahama said he believes the NDC will be voted back into power in December 2020 to complete the projects they started.

“NDC started the projects and I know by the Grace of God, we will come back and complete such projects.”