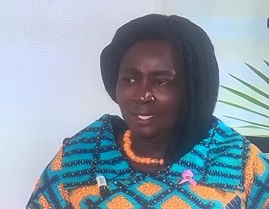 Vice Presidential Candidate for the NDC, Professor Naana Jane Opoku Agyemang says she will be ready to debate the Vice President Dr Bawumia.

Speaking on GH-One TV in response to her critics of her not having economics background, Prof Opoku Agyemang said it is not a requirement for the office of the vice president.

According to her, there is a precedent that some vice presidents the country had did not have an economics background and that also came from the NPP administration.

She noted that is not an issue for debate or it is being raised by the NPP because she is a woman.

“My critics are mostly NPP, in their own party, they have had Aliu Mahama was he an economist? The Veep chairs police council, must I be a security man? I’m not an economist but I understand the economy. Why, is it a requirement that the veep must be an economist? since when did that become part of it?”

On whether or not she will debate Dr Bawumia who is an economist as compared to her field of literature, Prof Naana Opoku Agyemang said yes she will be ready to debate the vice president.

She stated that the vice president has no security background but chairs the police council and to her, that explains it all.

Prof. Opoku Agyemang said her ability to be able to manage UCC without an economics background is evident.

Prof Opoku Agyemang also said she decided not to respond to some of the comments from the NPP members like that of Yaw Buaben Asamoa who believes her choice is a disservice to Ghanaians.

She said his comment only shows his understanding of the decision of the party to choose her as a running mate and he is equally also speaking against women in his own party not to be voted for.

However, Dr Bawumia in a radio interview last month said the presidential debate is unnecessary.

He said the debate may be interesting but both parties have records that can be assessed by Ghanaians.