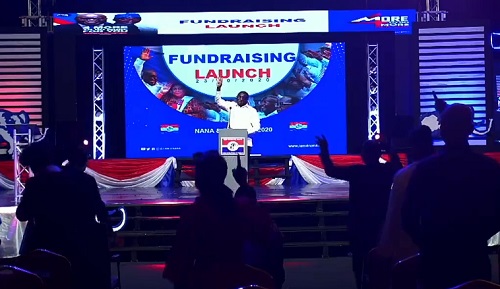 The NPP has launched the IAM4NANA fundraising campaign in Accra today Friday, October 23.

The Vice President Dr Bawumia who launched the campaign asked party members to support the campaign of the NPP to help them win the 2020 general elections.

According to him, they need to protect the gains they have made in the past four years.

He said they can not risk their flagship programmes in the hands of the NDC, hence there need for all to commit resources to ensure victory for the party.

Dr Bawumia said their 1st slot on the ballot paper shows that if Ghanaians want more development they will have to vote one but if they want two steps back in terms of development that will be the NDC.

Outlining some of the initiatives in place to help solicit for funds, he said a party member can adopt a polling station and support in cash or resources.

They can also dial *386# to also support the campaign or visit IAM4NANA.com.

Deputy Campaign Manager of the NPP, Dr Mustapha Abdul-Hamid also at the launch called on Ghanaians to support the party because if they do they will reduce electricity tariff which will help their businesses.

He charged members to fully be part of the campaign for a successful round 2 agenda.

Parliamentary Candidate for Dome Kwabenya, Adwoa Safo says all-female candidates must be supported to increase the female representation on the ticket of the party in parliament.