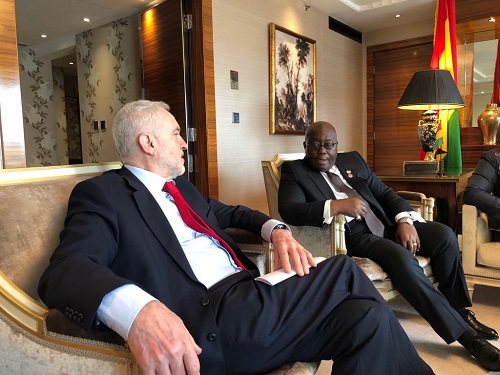 Leader of UK’s Labour party Jeremy Corbyn has cancelled a trip to Ghana later this week, urging opposition MPs’ to meet urgently to discuss ways to prevent a no-deal Brexit.

Corbyn has proposed that in order to prevent a no-deal exit, opposition MPs should help him defeat the government in a no-confidence motion and install him as a caretaker PM.

If he wins the vote, he plans to delay Brexit, call a snap election a Corbyn was expected in Ghana on a fact-finding mission, British media has reported.

His visit would have been the Labour leader’s second meeting with the President Nana Addo Dankwa Akufo-Addo after April 2018, encounter in the UK ahead of the Commonwealth Heads of Government meetings.

In that meeting at the Labour leader’s office, the two talked post-Brexit bi-lateral trade, reforms in the Commonwealth and UN and the role of the African Union and US forces in Africa.

A course about Brexit, the UK's plan to leave the European Union, is to be offered as an option by the University of Botswana's history department.
The course, called Modern Britain, will "study the crisis" as it happens, a notice shared on Twitter said.

Students will, however, not sit for an exam.

BS Bennett from the university confirmed to the BBC that the course will be offered.

"[It] is intended to link the present crisis, which is of interest to many people, to the historical background," he said.