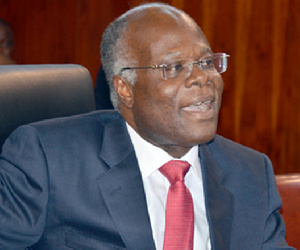 MP for Adansi Asokwa, K.T. Hammond believes that there is a need for the police to invite the Dean of the University of Ghana School of Law, Prof. Raymond Atuguba over his comments suggesting that a coup d’etat may be rife in Ghana.

Speaking to journalists in Parliament, Mr. Hammond said, “I will be surprised if they have not already invited him.”

Mr. Hammond also noted that such comments are only coming from people aligned with the National Democratic Congress.

“The NPP was not entirely happy about everything that the NDC regime did. Nobody called for a coup.”

“Why is it that in the course of the NPP administration, at every opportunity that they get, the irresponsible ones are calling for the intervention of the military,” Mr. Hammond fumed.

“The NDC; those irresponsible ones among us, should be very careful. Calling for coups today or coups tomorrow does not inure to anybody’s interest or anybody’s benefit.”

Prof. Atuguba who was speaking at a forum organized by Solidare Ghana on Tuesday while expressing concern about Ghana’s current socio-economic conditions, he said: “we do not want a coup in this country. Yet, I fear that if we do not act quickly, we may have one on our hands very soon.”

This comes as the convener of the #FixTheCountry Movement, Oliver Barker-Vormawor, is facing treason felony charges for making comments on social media that suggested a coup threat when he was criticising the e-levy.

The MP said Prof. Atuguba should have known better. He described his comments as “clear foolishness.”

“He is a professor and of no other thing than of law. He understands the constitution,” he added.