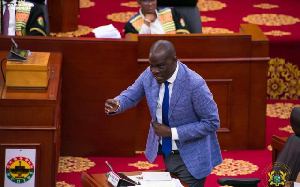 The Minority in Parliament has threatened to drag the Speaker to the Supreme Court over his decision to suspend the House indefinitely.

According to the Minority, the Speaker was supposed to adjourn the House. They described the act as illegal.

The also stated that the Speaker left with the mace of the House instead of leaving it behind as the law prescribed.

Speaking to the Media, Minority Leader Haruna Iddrisu said they are considering legal action against the Speaker.

READ ALSO :Â My actions in Parliament are in defence of rule of law -Â HarunaÂ IddrisuÂ

"Professor Mike Oquaye, I'm sorry, has become walking illegality and a threat to parliamentary democracy in Ghana. We will consider measuring and questioning his conduct by the standing orders and by the Superior Court of Ghana, we will let our lawyers study it carefully especially you've seen him, the Speaker carry the mace behind him when the House was suspended, I'm sure we should have stopped him to tell him that the mace during suspension remains there..."

Minority Leader Haruna Iddrisu has brushed off suggestions that he acted in a manner that violates Parliamentary rules.

This was after he described the Speaker of Parliament Prof Aaron Mike Oquaye as a "walking illegality" after the Speaker suspended the House on Saturday, April 4, 2020, instead of adjourning sittings.

After the proceedings, Mr Iddrisu said the Minority's commitment to the business of the House is unquestionable but they can not support any illegality.

"All I am doing is in defence of Parliamentary democracy, all I am doing is respect for due process and rule of law. We adopted a business statement on March 27, 2020, that the House will adjourn sitting on April 4. No one came with a motion to change that position, if Parliament is suspended in accordance with our standing orders, the mace is not carried away as we witnessed yesterday, that is why I described the Speaker as 'Walking illegality'. The President himself had indicated in his address to the nation that Parliament is exempt, we are in extraordinary times and the Speaker must respect due process, the Covid situation in Ghana is not comparable to Spain or Italy. We owe it to the Ghanaian people to continue sitting".