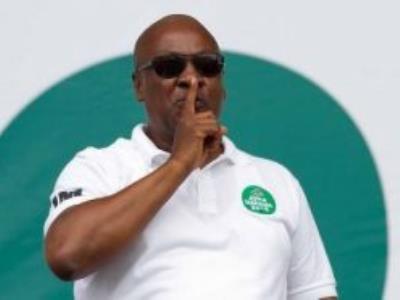 The flagbearer of the opposition National Democratic Congress (NDC), John Dramani Mahama says their manifesto has put some fears in the New Patriotic Party (NPP) government.

The NDC's manifesto for election 2020 is dubbed 'People's Manifesto'.

John Mahama speaking on Monday, October 26, 2020, when he engaged with some professionals in Ghana on the NDC Peoples’ Manifesto said it has shaken the government to act appropriately.

“I am overjoyed that even before the first vote is cast, the promises in the Peoples’ Manifesto have significantly aroused the sleepy conscience and attention of this Government and have shaken them to act selectively albeit too late in the day on some of our policy proposals.”

Mahama added that says Ghanaians deserve a President who will be truthful to them.

He assured that the NDC is on a mission to rescue Ghanaians from the Akufo-Addo government which has failed to live up to expectation.

“At this critical stage of our nation’s history, Ghanaians deserve more than ever before, a government that is honest and truthful to them. A government that takes responsibility and gives them results, not excuses or blame.”

John Dramani Mahama has appealed to Ghanaians to vote the party back to power for sustainable growth and prosperity for all.

He says his party is ready to save the country from what he believes is the haphazard rule of the Akufo-Addo administration.

In his speech at the launch of the NDC manifesto, themed ‘The People’s Manifesto,’ on Monday, Mr Mahama said the Akufo-Addo government is leading the country astray.

Therefore, should the NDC win the 2020 general elections, it would sanitise the system to provide equal opportunities and amenities for all citizens.