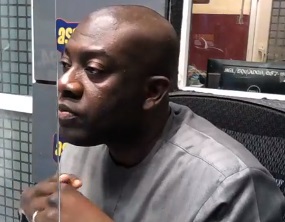 Minister for Information, Kojo Oppong Nkrumah said the NPP's decision to cancel the guarantor system for a student loan in the country will not affect the Trust Fund.

Speaking on the Manifesto promise of the NPP, Oppong Nkrumah said it is an enhanced student loan system that will allow anyone who has gain admission into a university to continue without any financial burden.

According to him, this system will conform with practices elsewhere in the world for a student loan.

He explained that their pipeline projects and programmes show that there will be enough jobs for people to pay their loans after school.

He said this on Asempa FM's Ekosiisen on Monday, August 24.

Oppong Nkrumah also added that the unemployment curve in the country is going down and they expect it to go down further due to the various projects being implemented.

This he believes will not affect the Trust Fund as guarantors were in the past required to pay for defaulting graduates.

Vice President Dr. Mahamudu Bawumia over the weekend revealed that tertiary students will be able to access students loans without the need for a guarantor if the Akufo-Addo led government is given another four-year mandate in the upcoming December elections.

The beneficiaries will be given a year moratorium after NSS before they will be required to pay back the loans, he said.

He made this known during the New Patriotic Party’s manifesto launch at the University of Cape Coast in the Central Region on Saturday, August 22, 2020.

"It is very key to note that the link between tertiary education and economic development is very, very strong. Countries which have high tertiary enrollment rate, have much higher levels of economic development...One of the problems in getting access to tertiary education in Ghana is affordability...All tertiary students except teacher and nursing trainees who will be on allowances, all tertiary students will now be able to get the option to obtain a student loan without the requirement of a guarantor."

He explained that, "The current scheme asks for guarantors and you know a lot of people are not willing to put their pensions on line so the students are not able to access it. So you don't need a guarantor, all you need is your national ID card that is all."