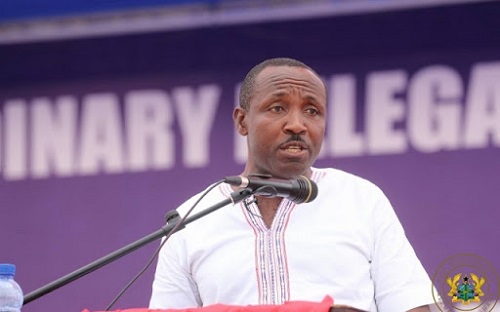 The NPP has staged another press conference to counter the one organised by the NDC some hours ago.

Addressing the press, General Secretary for the NPP, John Boadu called on the NDC to refrain from the continued concoction of non-existence violence and from causing extreme apprehension amongst the public.

According to him, it is a situation that has happened in several countries and Ghana must strive to avoid this.

He said the NDC is free to celebrate their gains but they should refrain from exaggeration and falsely claiming parliamentary majority which they don't have and not likely to have even if the disputed seats go their way,

John Boadu added that the NDC seek to rue an extremely peaceful and well-conducted general election for which Ghanaians must be proud of.

He, however, admonished the faithful of the NPP to remain calm, steady and wait for EC that will be declared at 5 pm.

He believes data collated by their strong room indicate a decisive win for President Akufo-Addo. This was the outcome of results collated from 92% of polling stations across the country, Mr Boadu said.

John Boadu further explained that President Akufo-Addo is, so far, leading the pack with over 6.6 million votes representing 51.46% of the total votes.

He further urged the general public to disregard assertions by the NDC of a projected win for John Mahama.