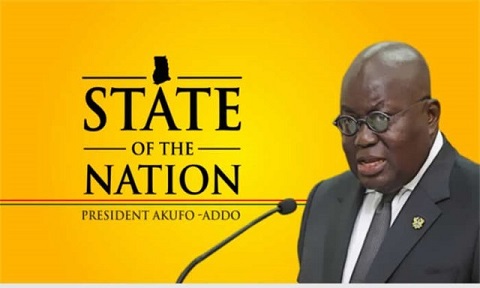 President Akufo-Addo will on February 20, 2020, deliver his State of the Nation Address in Parliament.

Osei Kyei-Mensah Bonsu who is the Majority Leader and Minister for Parliamentary Affairs made the announcement.

The delivery of the 2020 State of the Nation Address is in accordance with Article 67 of the 1992 Constitution of the Republic of Ghana and the Standing Orders of the Parliament of Ghana.

“Mr. Speaker, the House would also receive His Excellency, the President of the Republic in February 2020, when he attends upon Parliament in accordance with Article 67 of the Constitution to deliver a message on the State of the Nation”, Osei Kyei-Mensah Bonsu said.

The State of the Nation Address gives Ghanaian Presidents the opportunity to account for their stewardship.

The deadly Coronavirus keeps spreading and the figures keep going up.

The Leadership of Parliament has backtracked on its threat to sanction…

Akufo-Addo must be quarantined after return from Norway - Ras Mubarak

MP for Kumbungu Constituency in the Northern Region, Ras Mubarak has called for…

Pope Francis has come down with a “slight indisposition,” forcing him to cancel…

Black Stars Head Coach, Charles Kwabla Akunnor has arrived in the country after…

The Ranking Member on the Education Committee of Parliament, Peter Nortsu…