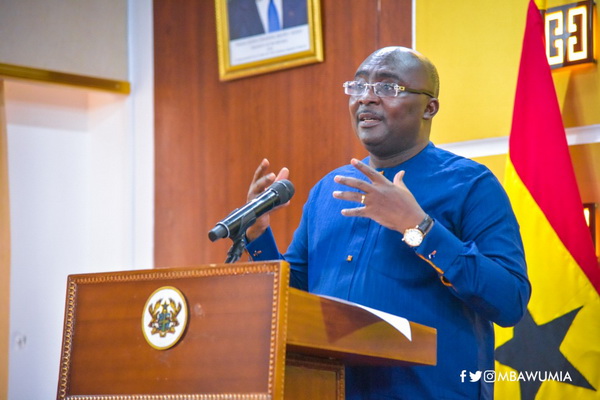 Vice President, Dr. Mahamudu Bawumia aimed a dig at their political opponents during his address at the commissioning of the Sinohydro Cape Coast inner city roads on Monday.

At the ceremony, Bawumia said the NPP government has silenced critics who don't like to read and understand issues but rather resort to lies.

According to him, when the Sinohydro road project idea was brought up their opponents said it won't be possible but after the projects have been commissioned they are now quiet.

"I am particularly happy today because when we first mot the idea of the Synohydro Road project after my visit to China in 2018 many of our political opponents said that what we were proposing to do under the Synohydro Road project was not possible. Unfortunately for some of our opponents when we say something and they don't understand, instead of asking for explanation and reading about it they just say you're lying. But today as we have commissioned the projects they are quiet," Bawumia said

Unfortunately for some of our opponents when we say something and they don't understand, instead of asking for explanation and reading about it they just say you're lying - Veep @MBawumia on Synohydro Road project. pic.twitter.com/iu3uSQss3Z

Speaking at the same ceremony in Cape Coast, the Vice President also named major road projects the NPP Government has undertaken in the Central Region, which he indicated, is part of the Akufo-Addo Government's overall commitment to improving road networks across the country.

The Construction of the Cape Coast Inner City Roads is part of the Master Project Support Agreement (MPSA) between the Government of Ghana and the Peoples Republic of China through SinoHydro Corporation.

A total of 441km of roads and two interchanges are part of Phase 1 of the agreement, which, among others, include a 100km Kumasi Inner City Roads, the on-going Takoradi interchange the first ever interchange in the north, the Tamale Interchange and the Jasikan-Dodi-Pepeso road, which have already been commissioned.