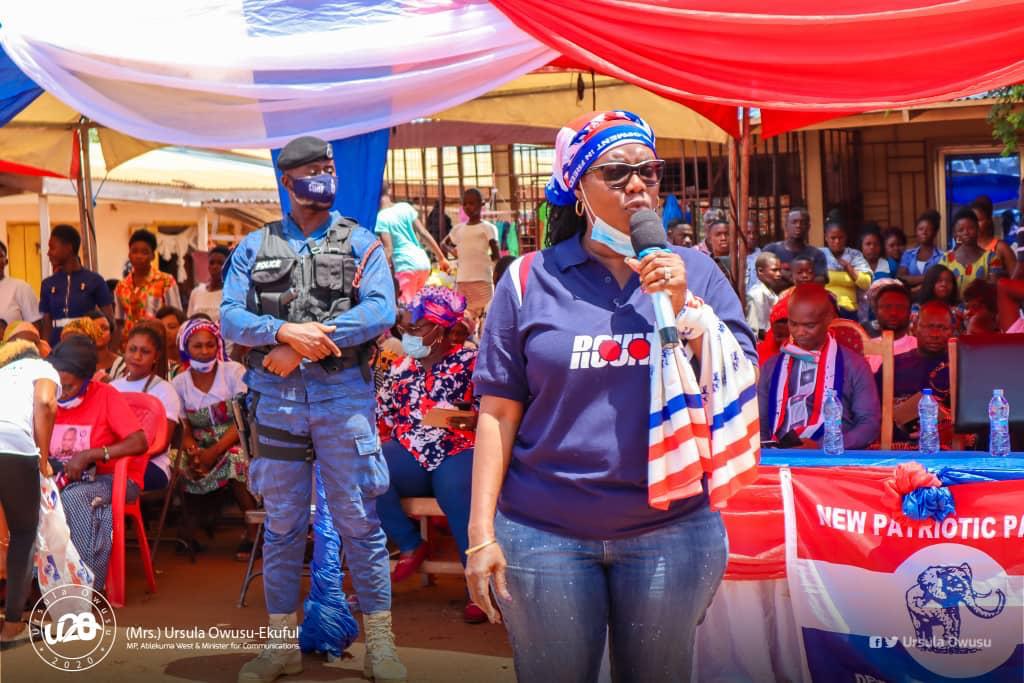 The Minister of Communications, Mrs Ursula Owusu Ekuful, took her campaign to the Bono Region, her tour started with Tain constituency, with the assurance to secure another victory for the NPP in the December 2020 parliamentary and presidential elections.

The three-day tour to the Bono Region is in line with the party’s intensive campaign duties to secure another victory in the upcoming general elections.

Beginning in the Tain constituency, Ursula Owusu called on the chief of Badukrom at his Palace and proceeded to hold a durbar of Chiefs and people. 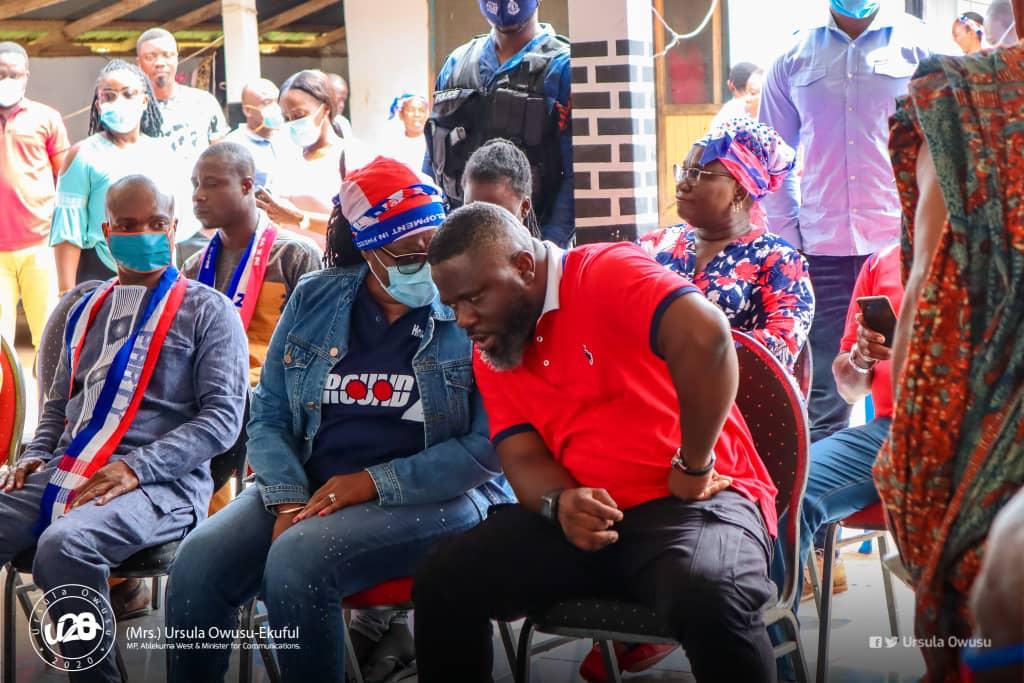 Speaking at the durbar of Chiefs and people held at Badukrom, she stressed that every household in the country has directly or indirectly felt the positive impact of this government.

According to her, Ghana has been identified as one of the fastest-growing economies in the world.

“We can say on authority that most of the campaign pledges have been fulfilled,” she said on Monday.

Mrs Owusu-Ekuful underscored the government’s commitment to deliver on all of its 2016 electoral promises and to continue implementing policies that would enhance the livelihoods of the citizenry.

This, she said can only be done if the ruling NPP is retained for another four-year term.

Responding to a number of requests by the Chief of the Badu Traditional Council, The Communications Minister said comparing the eight years of National Democratic Congress (NDC) while in power to the three and a half years of the NPP, there is so much different because of the commitment of the ruling party to ensure that development reached every corner of the country without discrimination. 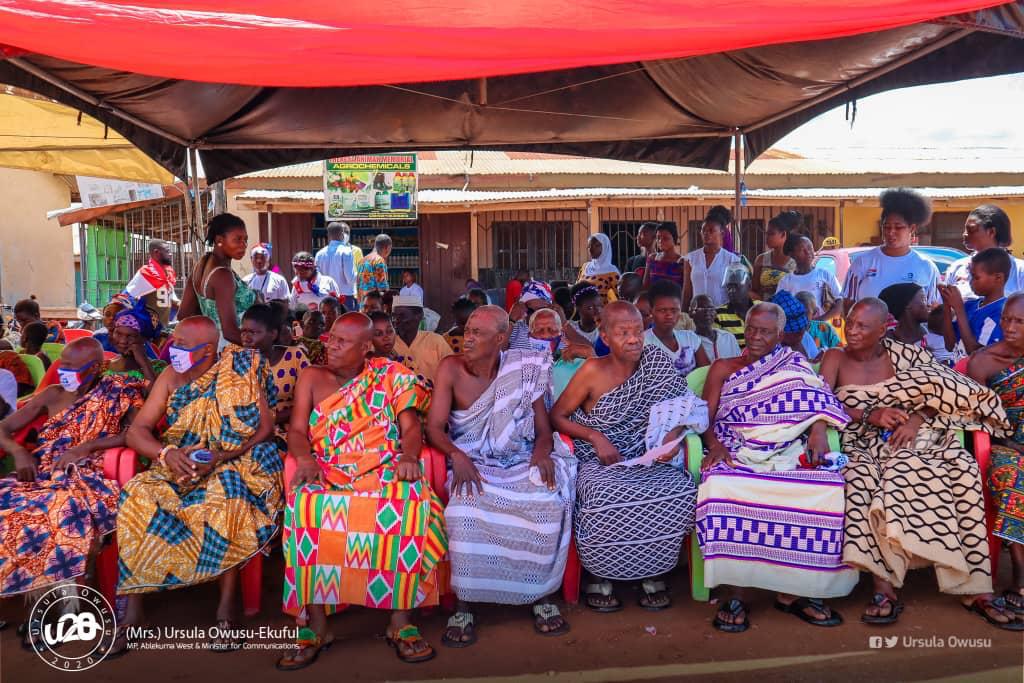 According to her, there is so much at stake for the future of Ghana adding that voting for NDC would mean moving backwards.

She enumerated a number of flagship projects the NPP had embarked on such as the One District One Factory (1D1F), Free SHS, NABco, Youth-in-Afforestation programme and Planting for Food and Jobs as some major developmental projects and social intervention initiatives under President Nana Addo Dankwa Akufo-Addo and Bono was no exception.

She urged the people of the Tain constituency to intensify their campaign to enable the party to win more votes to retain power.

The Member of Parliament for the constituency, Mr Gabriel Osei said his constituency has seen major developments under the NPP government.

He urged the people of Tain constituency to vote massively to retain the ruling NPP adding that “come ‪December 7, vote for Nana Addo Dankwa Akuffo Addo and Gabriel Osei for more infrastructural developments like good roads.” 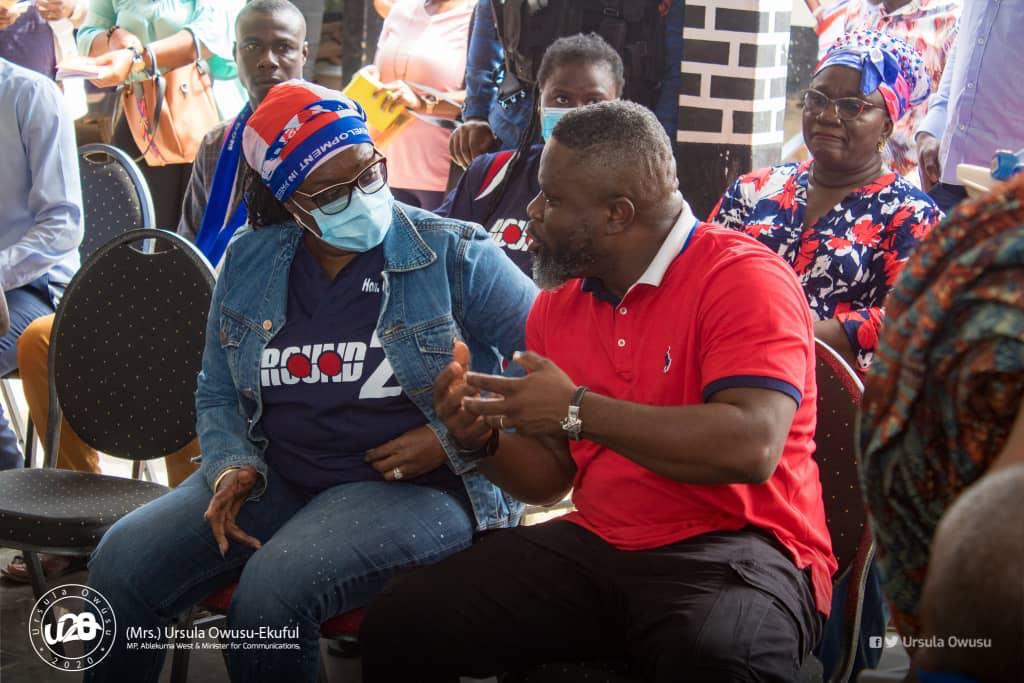 Hon. Kwadwo Baah Agyemang, Board Chairman for the National Sports Authority (NSA), who’s on the campaign tour with the communication minister also added that, the government has provided 10 modern youth resource centres and stadia to sustained sports development at the benefited regions and bridge the sports facility gap in the country.

He said let's thank Prez Akufo-Addo with Our Votes on December 7. “If you are pleased with the work that NPP have done so far… then please vote for us to continue our good works on December 7, 2020, to give Ghana more of developmental projects, he said

"We are delivering Free SHS, which Mahama said was a hoax, and we cannot go back to somebody who is capable of cancelling teachers and nurses trainee allowance. Mahama is behaving like a man who has married a woman for eight years and couldn’t impregnate her and when he’s divorce and after few months he sees the woman pregnant he’s goes back to her that he can take proper care of the unborn baby”. 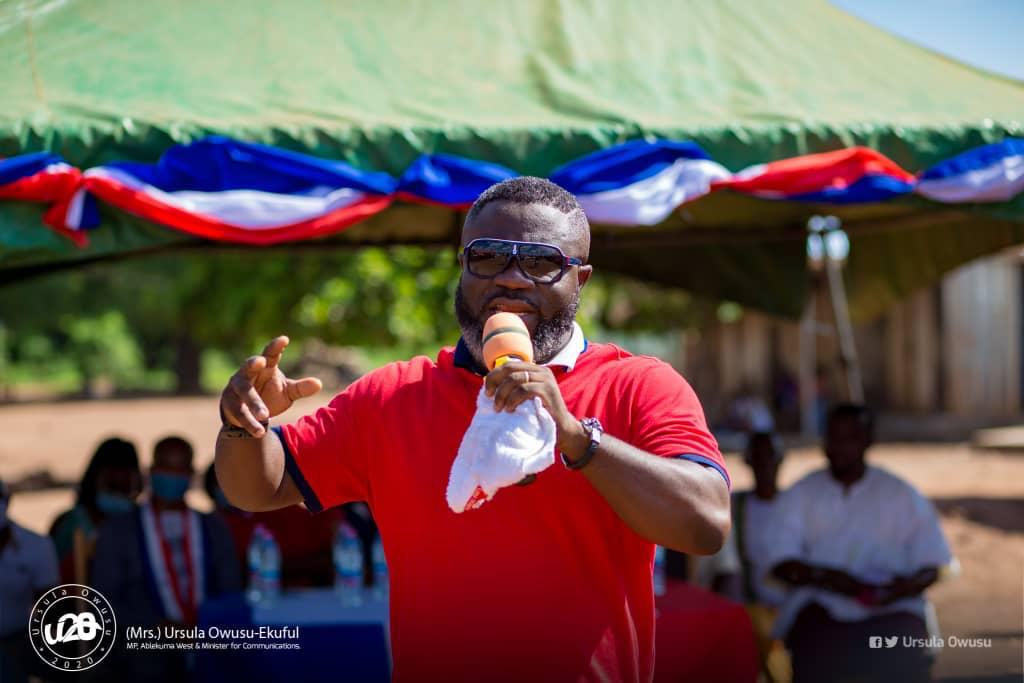 From Badu the minister continue to Bedibi and met the chiefs and the people within the community before heading to Jaman North constituency where they were met by the deputy Bono regional deputy minister who’s double as they MP and the NPP parliamentary candidate for the constituency Hon Saika Stevens.

He was accompanied by his the constituency executives and the DCE, Hon Adane who led the minster to Sampa, Suma Ahenkoro and seketia where the chief and the citizens waited into the night to welcome the communication minister.