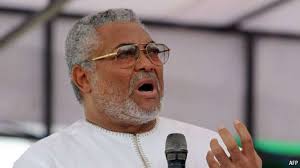 A funny spectacle unfolded at the parliament house on Thursday as dignitaries arrived for the last State of Nation Adress (SoNA) by President John Mahama.

Former President Jerry John Rawlings who had arrived at the event and was walking on the red carpet on the staircase into the house embarrassed outgoing Mayor of Accra and MP-elect for Ablekuma South, Alfred Oko Vanderpuije.

Mr Vanderpuije had rushed to greet Mr Rawlings and was trying to walk with him into the building.

But Mr Rawlings after acknowledging the greeting, gestured for Mr Vanderpuije to stop following him and proceeded to enter the room.