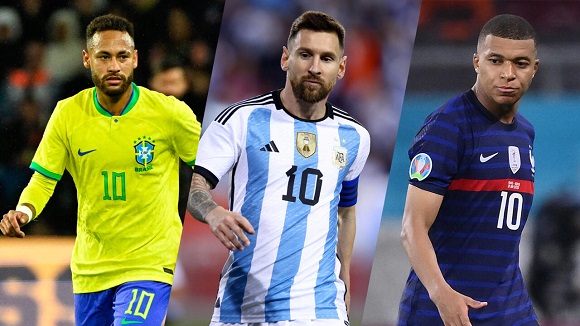 Will the World Cup in Qatar deliver back-to-back wins for France, a record sixth title for Brazil, a perfect send-off for Lionel Messi and Cristiano Ronaldo, or none of the above?

We take a look at five favourites to win football’s top trophy in Qatar – and the outsiders who could spring a surprise.

The FIFA World Cup kicks off in Qatar on Sunday, November 20, with defending champions France hoping to become the first team to win consecutive tournaments since Brazil in 1958 and 1962.

READ ALSO: World Cup 2022: We will do our best to make Ghana proud – Andre Ayew

While “Les Bleus” rank among the tournament’s hot favourites, they will be well aware that recent World Cup history has been unkind to title-holders.

Here’s a look at the squads with the best chance of going all the way, from the in-form teams to the World Cup stalwarts one can never write off.

Four years after their triumph in Moscow, France go into the World Cup as the defending champions and the bookmakers’ second favourites after Brazil. Les Bleus, who also picked up the Nations League title last year, are blessed with an abundance of talent. Their main asset is undoubtedly the front line, with the formidable duo of Kylian Mbappé and Ballon d’Or laureate Karim Benzema leading the attack, backed by the likes of Antoine Griezmann, Ousmane Dembélé and dependable veteran Olivier Giroud.

Elsewhere, injuries have brought havoc to the title-holders, knocking out the talismanic midfield duo of N’Golo Kanté and Paul Pogba. In defence, Presnel Kimpembe is another late drop-out while Raphaël Varane’s fitness is still cause for concern. Off the field, France’s tournament build-up has also been upset by a bizarre scandal involving allegations Pogba hired a witch doctor to “curse” Mbappé. Les Bleus have struggled this season to recover their form of 2018, winning just one of their last six competitive games. They will be wary of another statistic: since 2002, four of the last five defending champions have been knocked out in the group stage.

Brazil have won more World Cup titles than any other nation and are tipped by many to build on that lead in Qatar. The five-time champions currently top FIFA’s rankings and can count on a fearsome attack to rival France’s. Star striker Neymar has been in sparkling form for Paris Saint-Germain so far this season, scoring 15 goals in 19 games and setting up another 12. He will be backed up by Real Madrid’s Vinicius Junior and Arsenal’s Gabriel Jesus.

Veteran coach Tite can also count on the tournament’s most experienced defence, propped up by World Cup stalwarts Thiago Silva, Marquinhos and Dani Alves. At 38, captain Silva will have his last shot at winning a World Cup, eight years after the Selecao slumped to a humiliating 7-1 home defeat at the hands of Germany.

Argentina are also the only team to have recently defeated a fellow World Cup favourite, prevailing over Brazil in the 2021 Copa America final. That win ended Argentina’s 28-year wait for a continental trophy. Having finally won a title with the national side, Messi now has one last chance to clinch the only trophy that still eludes him: the World Cup.

Another giant of football, another farewell tournament. Like Messi, Cristiano Ronaldo will be playing in his very last World Cup in Qatar. More than his Argentinian rival, however, Portugal’s five-time Ballon d’Or winner has seen his star fade over the past year, tainted by a lack of play at Manchester United and an increasingly open feud with the club’s managers.

Fortunately for the Euro-2016 champions, coach Fernando Santos has enough talent at his disposal to offset the decline of the 37-year-old superstar. With the likes of Joao Cancelo, Danilo Pereira, Pepe, Ruben Dias, Nuno Mendes, Bernardo Silva, Joao Felix and Rafael Leao, the Portuguese have world-class options in every department. With other players finally free to step out of Ronaldo’s shadow, the fading of Portugal’s greatest footballer may yet turn out to be a blessing in disguise.

Germany: ignore at your peril

The last time Germany entered a World Cup as underdogs, on the back of a 5-1 thrashing by England in Munich, the unfancied “Mannschaft” soldiered on all the way to the final. That was 20 years ago, but then as now, Germany simply cannot be written off.

For the first time since World War II, Germany have failed to reach the quarter-finals in the past two major tournaments, slumping to an ignominious first-round exit as title holders in 2018. Four years on from that fiasco, incoming coach Hansi Flick has cooked up an intriguing blend of seasoned players and raw talent to bring to Qatar. The former include Mario Gotze, Manuel Neuer and the indefatigable Thomas Muller – all three veterans of Germany’s 2014 World Cup triumph. At the other end of the age spectrum, Dortmund’s 17-year-old wunderkind Youssoufa Moukoko will provide plenty of pace up front, as will Bayern Munich’s 19-year-old Jamal Musiala.

Seeking to play down expectations, German football managers have set their sights on a place in the semi-finals – hoping the team will go one step further when they host the Euro 2024 tournament in 18 months’ time.

England: While Germany seldom fail to deliver, England rank among the chronic underperformers when it comes to major tournaments, though their last two outings stand out as exceptions. The Three Lions reached an unexpected semi-final in 2018 and went on to lose the final of the Euro three years later. Since then, young forwards Phil Foden and Mason Mount have further matured, bolstering an attack that includes World Cup veteran Raheem Sterling and the 2018 Golden Boot winner, Harry Kane. England famously haven’t won a major title since 1966 and coach Gareth Southgate will be under pressure to ditch his defensive tactics as he bids to end the nation’s long wait for World Cup glory.

Senegal: Fresh from their triumph at the Africa Cup of Nations earlier this year, the Lions of Teranga are hoping to shatter the “glass ceiling” that has so far barred African teams from going past the quarter-finals of a World Cup. On paper, star players Edouard Mendy, Kalidou Coulibaly, Idrissa Gueye and Sadio Mane have what it takes to do just that. However, Senegal’s chances suffered a major blow with Mane’s injury just weeks ahead of the tournament. The Bayern Munich striker has been included in the squad, though he is unlikely to be fit to play before the knockout stages.

Spain: Euro semi-finalists last year, Spain rank among the most promising teams of the tournament, full of fresh talent. The last of the generation that won the 2010 World Cup have bowed out, but the Roja still stick to their game plan: controlling the ball and playing with flourish in the opponent’s half. Luis Enrique’s youthful squad counts few stars but can count on a formidable collective anchored by Barcelona’s midfield duo of Pedri and Gavi – the last two winners of the Kopa Trophy for the best player aged under 21.

Uruguay : The Celeste’s all-time top scorers, veteran strikers Luis Suarez and Edinson Cavani will take part in their fourth World Cup, guiding a new generation of talented young players, including the likes of Federico Valverde and Darwin Nunez. Uruguay, who last won this tournament in 1950, are a long shot to win a third title in Qatar. But the nation of just three million has a long history of punching above its weight when it comes to football.