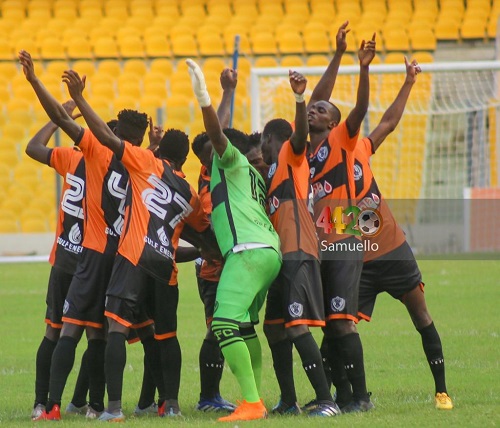 Legon Cities FC midfielder Abdul Wahab Hanan is positive his outfit will remain in the top-flight at the end of the season.

The Royals have not had the best of start in the ongoing season after the opening 9 games.Â They have managed only two wins from the nine games played, drawing four and losing three which amount to 10 points.

Due to this, they occupy 15th on the league log and a point above the relegation zone.

"Actually everyone is entitled to his opinion when it comes to watching a game." he told Muftawu Adamu

"It is our duty to prove everyone wrong. I want our supporters to just keep calm, have patience and trust in us."

Despite the inconsistencies in the season so far, Hanan is confident Legon Cities will avoid relegation at the end of the season.

"We are surely going to remain in the league, definitely."

Meanwhile,Â Legon Cities have thrown a word of caution to Great Olympics that they will teach them a bitter lesson when the two sides meet later this week.

The Royals will be locking horns with the Wonder club on Friday, February 14 at the Accra Sports Stadium in the Ghana Premier League matchday 9 encounter.

According to Legon Cities, the match will be played under floodlights and as it is Valentine's Day, there will be a lot of giveaways for the supporters.

It will be recalled that, when Legon Cities lost their first game, Olympics tweeted "Not all that glitters is gold ðŸ˜" which was believed to be aimed at the Royals 3-1 home defeat to Asante Kotoko at the Accra Sports Stadium.Â

Not all that glitters is gold. 😁

Seems Legon Cities, however, took the tweet personal and plans to payback Olympics for the jibe by beating them this Friday.