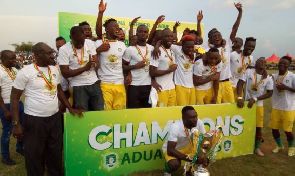 Aduana are winners of the Super Cup
Shares

A solitary strike from Bright Adjei in the 62nd minute gave Aduana all they needed to emerge as champions of champions.Â

Kotoko also won the MTN FA Cup and has to battle Aduana for supremacy in Ghana football.

The Super Cup is always between the league champions and the FA Cup winners and It officially opens the upcoming league season.