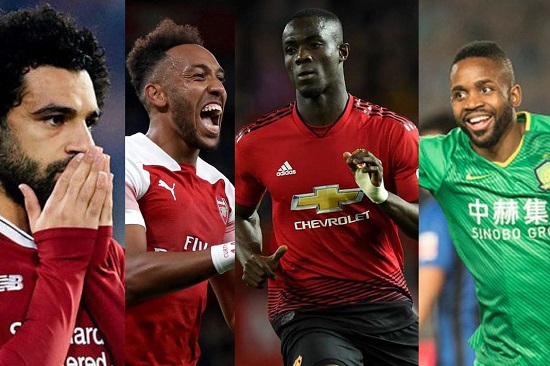 By the time the mid-season transfer window closed at the end of January, an estimated 2,000 footballers used the month-long opportunity to transfer from one club to another.

It is one of the two periods in the year when clubs are allowed to buy and sell players and although not as busy as the June-August window, it is a frenetic time as clubs in the major football-playing nations look to strengthen their teams for the second half of the season.

Among the list of movements, this January were a bevy of common African names: Bangoura, Boateng, Diaw, Kamara, Mendy, Owusu, Sissoko and Touré.

But while this might suggest there is a healthy exodus of Africa’s top talent to the bigger and more lucrative leagues of Europe, it is but an illusion.

African footballers are still a wanted commodity, but not necessarily those from the continent.

Instead, it is the ever-increasing numbers from the diaspora – second- and even third-generation kids born in Europe to African parents who are prized for the physical prowess and creativity that their African genes provide, but also having had the benefit of a more formal footballing education in Europe.

France has always been the primary destination for African footballers with the top clubs long casting an eye over the best that the continent has to offer.

But while there were many African footballers moving to and from French clubs this January, not one arrived directly from an African team.

In England, Germany and Spain, none from them either. Two Belgian clubs took players from academies in Mali and Senegal but not from clubs.

Only Italy’s Atalanta spent €200,000 ($225,533) on William Tabi from ASEC Abidjan in the Ivory Coast. His teammate in the Ivorian under-20 side, Wilfried Singo, also went from Denguélé to Torino.

It is as if the market has dried up and a lot of it has to do with the age restrictions on player movements,” London-based agent Rob Moore tells FORBES AFRICA.

South African Moore was at the heart of the biggest move of the January transfer window as American Christian Pulisic went for some €60 million ($67.6 million) from Borussia Dortmund to Chelsea.

“There is little doubt that when FIFA brought in the rule that restricted the movement of players aged 18 it put African players at a severe disadvantage,” adds Mike Makaab, whose agency has moved players to Belgium, Germany, Greece and Italy in the past.

“Clubs want younger players because they believe they can still mould them. It has been a major blow to the market although I wouldn’t be surprised if that rule is changed.

“Obviously, it would have to come with strict rules and restrictions on potential exploitation.”

But African football is about much more than only an incubator of talent. It has established competitions like the Nations Cup, Champions League and Confederation Cup, which now all enjoy fulsome coverage with matches broadcast live around the world.

“Football clubs in Europe are spoiled for choice,” Makaab adds.

“The market in Africa is competing with players from Eastern Europe, from the Americas and now increasingly Asia. There is a lot of choice.

“I find that sometimes the clubs in Africa are not realistic in their pricing of players. They want too much for players who have already established themselves, not cognizant of the fact that clubs can find similar quality elsewhere in the world.”

Moore says clubs in Africa must also realize that the increasing sophistication of football and its growing technicality demands better-developed players, with physical prowess and skills now needing to be matched by decision-making and sporting intelligence.

“This is probably why now there are so many young players from the USA that are making a breakthrough in Europe. American youngsters grow up with a lot more of theory of the game than those from Africa. It’s the way they are coached at an early age.”

Historically, most transfers from Africa are from the west. Players from north and southern Africa are paid better in their domestic leagues and, therefore, tend to stay home.

“You find that South African footballers don’t really have that ambition to go overseas anymore as the money in the Premier Soccer League has improved. Once they get to the PSL, many of them tend to sit on their laurels,” laments Bafana Bafana coach Stuart Baxter, who feels it is imperative that players move to Europe for the experience and increased competition.

Our national team is stronger if there are more players based at European clubs. I try to encourage players to get out there but not many make the move.

“The best African national sides are those with the most players at the biggest clubs. That’s the reality,”  Baxter adds.

When South Africa won the African Nations Cup title in 1996, the majority of their players were either already at European clubs, or on the brink of making the move.

Fast forward to this season and the country does not have a single player in the top leagues in England, Spain, Germany and Italy, and just a handful plying their trade in France.

It’s a fact that correlates with the downward turn in fortunes for the national team.

Read also: The story of Sulley Muntari, from Liberty Professionals to Albacete