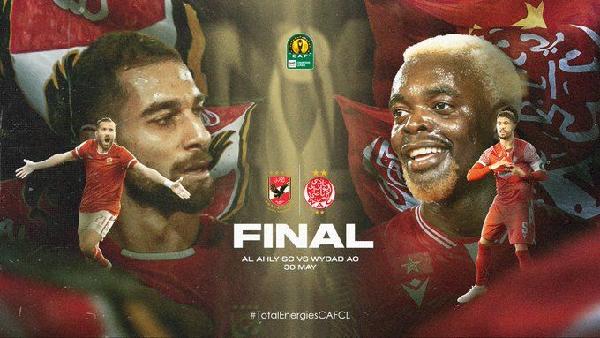 The Egyptian giants who reached this stage after beating ES Setif in the semifinals are looking to win a record-extending 11th CAFCL title and become the first team to win the African crown for a third successive season.

“If we can make history, it will be a great thing for this club and the players,” said coach Pitso Mosimane. “But we know we are coming up against a very strong opponent and we will have to prepare well.”

Wydad’s path to the final has seen them overcome Hearts of Oak (preliminary round), top their group ahead of Zamalek, Sagrada Esperanca and Petro de Luanda, before narrowly ousting CR Belouizdad 1-0 in the quarterfinals, and then claim a 4-2 triumph over Petro in the semifinals.

The Moroccan club is a two-time CAFCL winner and has been one of the most consistent teams in this top-tier continental competition, reaching the semifinals or better in five of the last six seasons.

Wydad coach Walid Regraui says he is not worried by the controversy of CAF selecting their home ground as the venue for a one-off final: “We are ready to play anywhere. CAF decided to play the final in Morocco and we should respect their decision. It is not important for us where the final will take place. We are ready to play in Dakar, in Istanbul or in any other place. We earned four away wins in this edition and we are ready to grab a fifth.”

Percy Tau – The South African forward had a hand in all six of Ahly’s goals in the semifinal against ES Setif and will be looking to wreak havoc amongst Wydad’s defence. If Tau can hit his straps, the Red Devils will be favourites for a third successive African crown.

Aymane Hassouni – The 27-year-old midfielder is the brains behind Wydad’s play, orchestrating their passing moves and providing the creative spark when something a little unorthodox is required to break down a defence.

In head-to-head stats, Al Ahly and Wydad Casablanca have met in 10 matches dating back as far as 2016. The Red Devils have claimed four wins compared to two for the Red Castle, while four games have been drawn.

The teams last met in the semifinals of the 2019-20 CAFCL, with Ahly claiming a 5-1 aggregate victory. However, their previous meeting in a final of the continental competition was won 2-1 on aggregate by Wydad.

Below are some facts about both teams:

●      This will be the third CAF Champions League final between Moroccan and Egyptian sides, and a repeat of the 2017 showpiece, which saw Wydad Casablanca win (2-1) over two legs (also Zamalek v Raja Casablanca in 2002).

●      This will be Wydad Casablanca’s third CAF Champions League final in six seasons, after 2017 (winners) and 2018-19 (runners-up) and their fifth overall in the CAF Champions League/Africa Cup of Champions Clubs (W2 L2), the most by a Moroccan side in the competition.

●      The final is the 11th meeting between Al Ahly and Wydad Casablanca in the CAF Champions League, with the Egyptian side edging the head-to-head battle so far, winning four to Wydad’s two victories (D4).

●      Al Ahly have won their last two CAF Champions League matches against Wydad Casablanca - both legs of their semi-final meeting in 2019-20 (2-0 and 3-1) and are looking to win three in a row against the Moroccan side for the first time in the competition.

●      Defending champions Al Ahly started slowly in the CAF Champions League this season, failing to score in three of their first four games (W1 D1 L2), while they’ve scored in each of their last six, averaging 2.2 goals per game (13 in total – W4 D2).

●      Al Ahly have had at least 25 more high turnovers (94 - the number of sequences that start in open play and begin 40m or less from the opponent's goal) than any other side in the CAF Champions League this season, with 20 ending in shots and three ending in goals – both competition highs in 2021-22.

●      Wydad Casablanca are the top-scoring team in the CAF Champions League this season with 20 goals, while they’ve had nine different players score at least once (excluding own goals), no side have had more different goal-scorers in the competition this season (level with Mamelodi Sundowns).

●      Al Ahly’s Percy Tau has been directly involved in eight goals (three goals, five assists), more than any other player in the CAF Champions League this season, while the last player with more in a single campaign was Trésor Mputu in 2018-19 (9 - four goals, five assists for TP Mazembe).