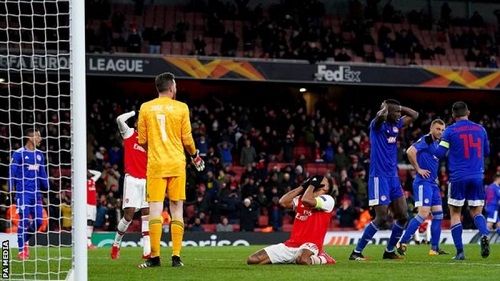 Captain Pierre-Emerick Aubameyang missed a glaring chance with the last kick of the match as Arsenal crashed to a shocking Europa League defeat at the hands of Olympiakos.

Aubameyang, so often the Gunners' saviour, looked like he had once again rescued his side from an abject showing when his superb scissor kick - which cancelled out Pape Abou Cisse's opener - put them in the driving seat with seven minutes left of extra time.

But the visitors punished awful set-piece defending for a second time on the night as Youssef El Arabi poked home in front of their raucous travelling fans.

And there was still time for the unmarked Aubameyang to somehow screw wide from five yards out and condemn Mikel Arteta's side to their first defeat of 2020.

For large periods of a flat game a full-strength Arsenal XI were frustrated, frustrating and feeble in front of goal - with their first shot on target not arriving until the 77th minute.

Olympiakos were hardly buccaneering in their approach, especially considering they had lost the first leg in Athens, but carried out their gameplan perfectly to steal a famous win and progress to the last 16.

Last season's Champions League semi-finalists Ajax are out of the Europa League after being beaten 3-2 on aggregate by Getafe over two legs.

Ajax, who were 2-0 down from the first game, went behind early on as Jaime Mata opened the scoring for Getafe.

Danilo quickly levelled for Ajax, before Mathias Olivera scored an own goal for the Spanish side in the second half to put Ajax 2-1 up.

But Erik ten Hag's men, top of the Dutch Eredivisie by three points, could not find a way past the resilient Getafe, despite enjoying 70% of possession.

The Spanish side more than held their own and were deserved winners of the tie, hitting the woodwork three times and registering nine attempts on goal in Amsterdam - the same amount as Ajax.