Arsenal give Fulham an unfriendly welcome to the Premier League 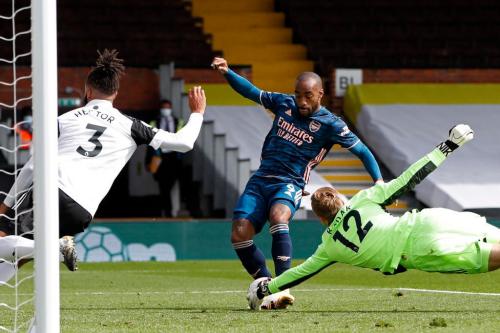 Arsenal started the new Premier League season with a blistering performance to demolish newly-promoted Fulham at Craven Cottage by 3-0.

Goals from Alexandre Lacazette, Gabriel Magalhaes and Pierre Emerick-Aubamnyang either side of the half gave Fulham an unfriendly welcome to the 2020/21 Premier League season.

Fulham started the match better of the two sides, applying pressure on Arsenal and nearly fetch the first goal when Aboubakar Kamara was through goal against Bend Leno but the goalkeeper came up top.

10 minutes later the miss proved to be a costly one for Fulham as Arsenal opened the scoring courtesy French international Alexandre Lacazette. The Frenchman reacted the quickest to a goalmouth scramble to give the Gunners the lead.

His goal meant that he is the only premier league player to score in the opening game of the premier league twice. ( 2017/18 against Leicester City and 2020/21)

Willian came so close to a debut goal for Arsenal to double their lead however, his spot-kick came off the woodwork with the first half ending 1-0 in favour of the Gunners.

Arsenal started the second half with the same intensity from the first and their effort was rewarded 4 minutes later when Gabriel Magalhaes Premier League debut got off to a good start, heading home from a corner kick to double Mikel Arteta's side advantage.

Aubameyang made put the icing on the cake  6 minutes later when he latched onto a long ball from Willian and scored a screamer to make it 3-0 for Arsenal.