Arsenal win at Chelsea to return to top of table 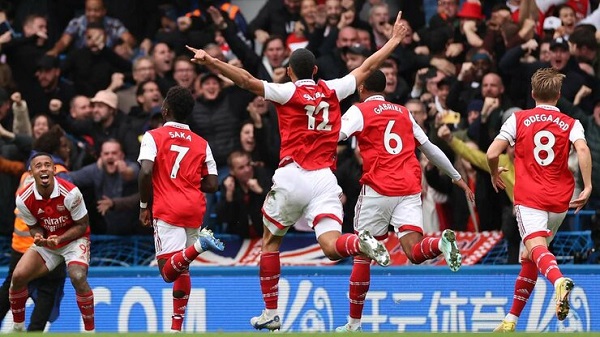 Gabriel Magalhães’ second-half strike ensured Arsenal returned to the Premier League summit and reaffirmed their title credentials with a superb 1-0 win over Chelsea at Stamford Bridge.

The Gunners had the best of the first-half chances in a cagey opening 45 minutes, as Ben White dragged a shot wide from deep inside the box, while Gabriel Jesus saw his effort blocked by Thiago Silva after weaving inside the Chelsea defence. Jesus had an even better opportunity to get Arsenal off the mark when being picked out by Gabriel Martinell, but his diving header went wide after being left unmarked inside the area. It was a quiet half for former Gunners skipper Pierre-Emerick Aubameyang, and he incurred the wrath of his old boss Mikel Arteta with a late challenge on White which earned him a deserved yellow card.

Tensions were simmering, as Bukayo Saka sought retribution against Marc Cucurella after the Spaniard’s late tackle on the England winger went unpunished. Saka responded with his own uncompromising challenge to earn himself a booking towards the end of the first half.

Graham Potter would have wanted more attacking intent from his side after the break to ignite the atmosphere inside a subdued Stamford Bridge, yet it was Arsenal that continued to carry the greater threat. Saka played a short corner to Martin Ødegaard, but neither Thomas Partey nor Martinelli could divert a header goalbound.

However, Arsenal broke the deadlock for a well-earned lead when Saka’s corner was allowed to go right across the face of goal which Gabriel was able to prod into the roof of the net.

It was the Brazilian’s ninth goal from a corner since arriving from Lille in September 2020, more than any other PL player in that time. It was a miserable reunion for Aubameyang against his former employers, with the former Gabon skipper substituted moments later and replaced by Armando Broja. The Gunners wanted another goal and had a strong penalty shout when the ball struck Cucurella’s arm, but the VAR determined this took place outside the box.

Arteta’s men claimed the win, which they thoroughly warranted on the balance of play, to move two points clear of Manchester City after securing a third consecutive away league win over Chelsea for the first time since 1974. Meanwhile, the Blues’ 12-match unbeaten home run in all competitions since losing to the Gunners in April comes to an end, and they stay seventh.