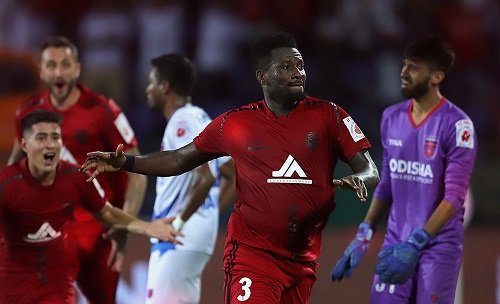 Forward Asamoah Gyan netted his first competitive goal in the Indian Super League to grab the winner for NorthEast United against Odisha on Saturday afternoon.

The 33-year old forward netted the winner with just seven minutes left from a powerful header.

Redeem Tlang had opened the scoring for the home side just two minutes into the game.

However, the visitors equalised on the 70th-minute mark through striker Xisco Hernandez in a pulsating second half.

Gyan then headed in the winner for his side in the 83rd minute after some spell of dominance from NorthEast United.

The goal is Asamoah Gyan's first in the ISL after two games.

NorthEast United are unbeaten in their first two games of the season after drawing the opener against champions Bengaluru FC.

Asamoah Gyan has taken his joyful social lifestyle to his new club in India as he was seen in a video composing remixes to some Indian hip hop tunes.

Gyan 33, completed a move to Indian side, North East United on a free transfer after seeing out his contract at Turkish Super Lig side Kayserispor at the just-ended season.

Signing for NorthEast United became Gyan's tenth club since making his debut for Liberty Professionals in 2003.

The Guwahati based club shared a video of their new signing on their official Instagram handle giving fans snippet of how their marquee signing is already having an impact on the team.

From the video, one could see Ghana's all-time leading scorer with 51 goals has already built a rapport with his new teammates which a good sign for him starting a new chapter in Asia.

6️⃣ Days in India and Baby Jet is already dishing out Indian Hip Hop Remixes! 🎶 . 🔊🆙 For this one! 👏🏻 . #StrongerTogether