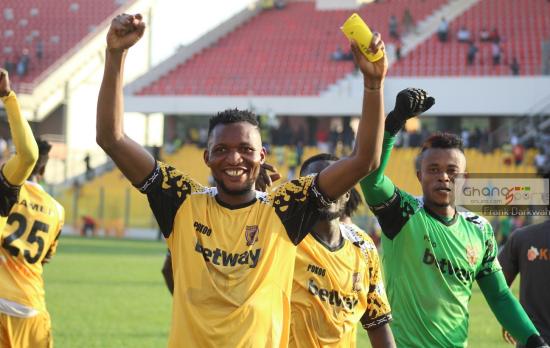 AshantiGold have opened talks with two of their key players to tie them down on a new deal.

This has been revealed by the club's Chief Executive Officer Emmanuel Frimpong that's they are in talks to fend off interest from clubs securing to sign Abdul Latif Anabila and James Akaminko.

The midfield duo have been linked with moves away from the Len Clay Stadium, specifically to regional rivals Asante Kotoko.

But the new Miners CEO says that the club has started extension talks with both players.

“We are already in talks with them [Latif Anabila and James Akaminko] for fresh contracts.

“We can’t afford to lose them to any local club, so we are holding talks with them with good offers,” Frimpong told Oyerepa FM.

Having accepted to represent Ghana in the 2020/21 Caf Confederation Cup, Frimpong added that AshantiGold will be augmenting their squad with new signings.

“The squad will be strengthened with new players for our Caf Confederation Cup campaign,” he noted.

Meanwhile, AshantiGold new coach Roberto Landi is hopeful his team will fare better than they did last time around in the CAF Confederation Cup.

The club’s last participation in Africa in the 2019/20 CAF Confederation Cup came to an abrupt end in the preliminary stages after they got eliminated by Moroccan club RS Berkane.

The team was slated for not going far in the competition by its supporters and they have another chance to make amends.

According to the Miners head coach, they will seek to improve on their past appearances and go beyond the group stages.

Speaking to Oyerepa FM, he noted that he has been keeping in touch with the players and technical staff of the club as they prepare ahead of next season.

“I am waiting for the borders of Ghana to be opened so I can return but I have been keeping in touch with my players, other technical team members and hope they are training as I have scheduled for them,” Landi said.

“We want to do better than what AshGold did last time in the Confederations Cup, we will do our best but hope COVID-19 does not affect us.

“I wish I was in Ghana to monitor their training. We will add new players especially those who will give revenue to the club.”