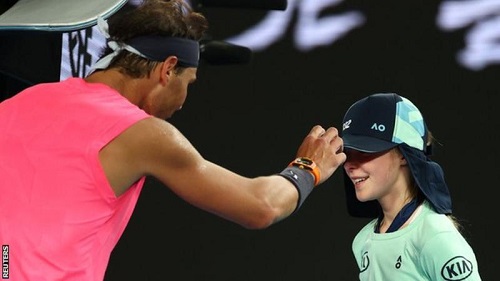 World number one Rafael Nadal reached the third round of the Australian Open with a straight-set win over Argentina's Federico Delbonis.

The Spaniard will face compatriot and 27th seed Pablo Carreno Busta next.

Both he and Frenchman Simon copied the Spaniard's routine after they were given time violations, and Kyrgios has previously criticised Nadal for the time he takes between points

The two could meet in the fourth round.

"There weren't any extracurricular activities I was doing before my serve to waste time," Kyrgios said.

The Australian has previously described Nadal as "super salty".

Nadal was irritated when Kyrgios served underarm in their meeting in Acapulco last year and has previously said the 24-year-old "lacks respect".

World number one Nadal has a 4-3 head-to-head lead over Kyrgios, but the Australian leads 2-1 on hard courts.

Kyrgios, the 23rd seed, said he was not thinking about the rest of the tournament or who he could meet in future rounds.

The Australian appeared on course for a swift victory, breaking his 61st-ranked opponent at the start of each set and leading 4-2 in the third.

However, Simon hit back to win four games in a row before Kyrgios, lifted by the packed crowd, found the decisive break late in the fourth set.

"I could have gone to a very dark place in the fourth set but I put it away," Kyrgios said.

"I definitely lost my way a little bit. It would have been very interesting if it went to a fifth set."

Kyrgios also apologised to his player box, saying it was "not acceptable" for him to take out his third-set frustrations on them.

"I apologised as soon as I went back into the locker room. They don't deserve that," he said.

"They do a lot of things for me on and off the court."

Kyrgios hit 28 aces against Simon and will donate A$200 for each one to the bushfire appeal.

Legendary former player John McEnroe has also said he will contribute A$1,000 to the appeal for each set Kyrgios wins in the tournament.

The National Communications Officer of the National Democratic Congress (NDC)…