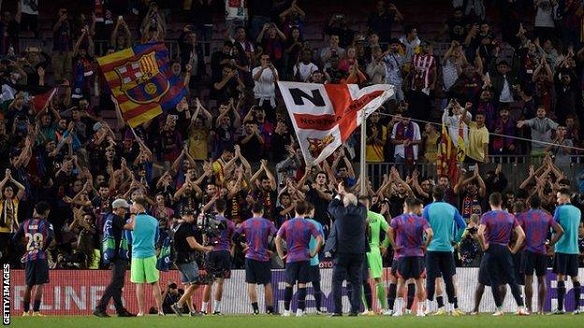 Six-time winners Bayern Munich secured top spot in Group C as they waltzed to a comfortable 3-0 victory against Barcelona, maintaining their 100% record in the process.

It was a harrowing night for Xavi's side, who had already been dumped out of the Champions League before kick-off, and provided little competition for their German opponents.

It took only ten minutes for the visitors to open the scoring, with Sadio Mane perfectly timing his run to burst onto Serge Gnabry’s through ball before delightfully finishing past Marc-Andre ter Stegen.

That put Bayern in control, with Barca offering little in response as they struggled to break into the final third. By contrast, Julian Nagelsmann’s side carried menace and speed whenever they broke forward, and they duly added a second on 31-minutes as Eric Choupo-Moting slotted through the ‘keeper from Gnabry’s pass.

It took the hosts until the 39th minute to register their first shot of the match, and even that was barely worth noting as Robert Lewandowski clattered into the wall. The striker was then left further frustrated when a penalty decision, originally awarded in his favour after a tackle by Matthijs de Ligt, was overruled following VAR intervention.

Bayern nearly rubbed salt into the wound after the break when Gnabry found the back of the net with a terrific curling effort, only to be judged offside, but in truth they were already cruising against a side who had no potency whatsoever in the final third. And they got the third in stoppage time as Benjamin Pavard got on the scoresheet.

Barca in the end failed to register a single shot on target across the 90 minutes, with their only two chances coming when Sergio Busquets and Ansu Fati fired high and wide.