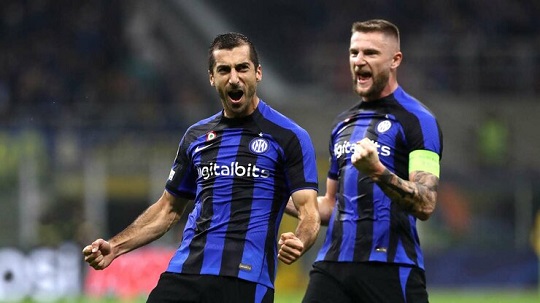 Inter Milan qualified for the UEFA Champions League (UCL) knockout stages for a second consecutive season as they strolled to a 4-0 win over Viktoria Plzeň.

In the process, Simone Inzaghi’s men eliminated five-time champions Barcelona, dropping the Catalan giants into the Europa League for the second campaign in a row.

The Nerazzurri have been notoriously slow starters in the UCL of late, scoring just two of their last 14 goals in the competition before HT. That tally was doubled in a dominant first-half display that alleviated any nerves among the home faithful.

Jindřich Staněk was doing his level best in the Plzeň goal to deny them, making a number of impressive saves before Inter finally found their breakthrough. The overlapping Alessandro Bastoni delivered a brilliant lofted cross to the back post where Henrikh Mkhitaryan was waiting, stooping to force his header into the back of the net.

That lead would be doubled by Edin Džeko, who netted for the seventh time in five appearances against the Czech champions. Nicolò Barella’s glorious ball out to the left found Federico Dimarco, allowing the full-back to deliver the Bosnian forward a simple tap-in and leave Plzeň with a seemingly unassailable task in the second half.

Michal Bílek’s men had conceded at least four goals in three of their group games so far, and another drubbing was certainly on the cards as Inter looked to put shine on the scoreline. In the early going of the second half, Mkhitaryan rattled the post and Staněk denied Lautaro Martínez as the visitors clung onto their pride. The inevitable third goal did eventually arrive, as Martínez unselfishly gave up his own chance of a goal to slide in Džeko, who produced an incredibly classy finish to put the result beyond a shadow of a doubt. The returning Romelu Lukaku, playing his first game since August, netted a fourth after some neat interplay with Joaquin Correa, allowing him the space to slam home his side’s fourth of the night.

A dominant display from the Italian giants sealed Barcelona’s fate, eliminating them from the UCL group stage for a second successive season. Inter progressed, though will have to rely on beating Bayern Munich and hoping the Rekordmeister drop points against Barcelona to win the group.