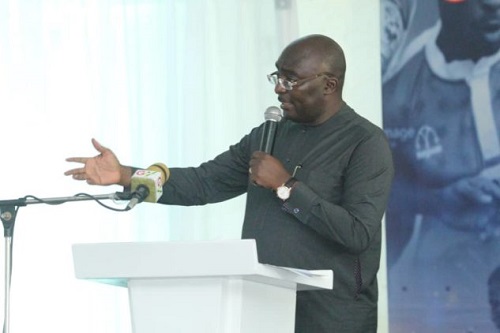 Addressing members of the football fraternity during the launch of the 2019/2020 Ghana Football season in Accra, the Vice President said the paperless system should not only be limited to the business community because it has many advantages which football clubs should also benefit from.

“One important thing both the GFA and the clubs should embrace in this era of digitisation is the paperless system this Government is championing,” Dr. Bawumia said.

“The paperless system should not only be synonymous with business or banking transactions because its enormous benefits can extend to football clubs as well.”

“The paperless system should be the way for our clubs because to go paperless is to digitize, and to digitize is to monetize,” the Vice President added.

Stressing on why football clubs should go paperless in their operations, Dr. Bawumia revealed that the introduction of the paperless system at the harbour, the DVLA, passport office, etc. has been a success, adding that considering the nature of business of football clubs, the best way for them is to go paperless and digitize.

“The paperless system the Government introduced at the harbour, the DVLA, the passport office and other places has made business transactions easier, cheaper, reduced wastages, cost, fraud and corruption, as well as maximized government revenue.”

“In football, the problem of high cost of printing match tickets and corrupt practices such as under declaration of gate proceeds from sale of match tickets, which affect the clubs financially, will be a thing of the past if the football clubs adopt the paperless system;” Dr Bawumia urged.

READ ALSO:  Digital innovation is key to the dev't of Airports in Africa - Akufo-Addo

The Vice President also explained that adopting the paperless system will enhance the relationship between Ghanaian football clubs and their supporters, because digitization will bring fans closer to their local clubs because of easy access to club information.

“As a Tottenham Hotspurs fan in Ghana, I don't need to write to Tottenham Hotspurs to know how many matches and goals some of the club's greatest players like Glenn Hoddle, Gary Lineker, Paul Gascoign, Jurgen Klinsmann and Robbie Keane played and scored. Everything is paperless and everything is digitized. Just by the click of a button, you get every information and you can buy everything from the club with ease.”

“Again, adopting the paperless system and going digital will greatly enhance the relationship between fans and their local football clubs because digitization will bring the fans closer to the clubs if they can easily access club information online and also buy paraphernalia and match tickets.”

“This is very possible, my brothers and sisters. Especially with the availability of mobile money, clubs can easily and directly control the sale of tickets and club paraphernalia. I encourage all football clubs to go for it and maximise revenue.”

Meanwhile, the Vice President has told the football community that he will channel their request for a second look at the 17.5% VAT levy clubs pay on their gate proceeds.

Responding to an appeal made by GFA President Kurt E.S. Okraku for government to consider giving the clubs a tax waiver on their gate proceeds, the Vice President said he will communicate the request to the Minister of Finance for it to be considered in the next budget.