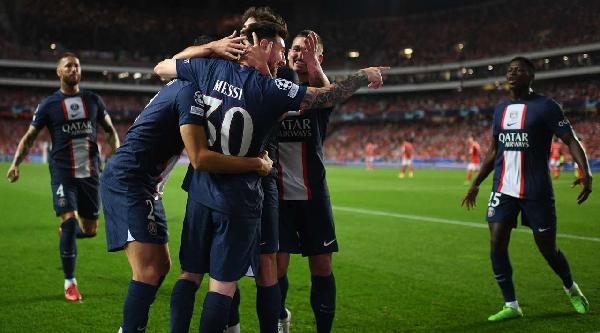 A brilliant contest between two sides who came into this game unbeaten in all competitions finishes all square.

Paris Saint-Germain struck somewhat against the run of play, Lionel Messi curling a beautiful first time effort into the back of the net.

Benfica pulled one back through a Danilo Pereira own goal after an inviting cross from Enzo Fernandez.

Paris Saint-Germain began to turn the screw in the second half, with Messi and Neymar getting on the ball more frequently looking to dictate proceedings.

Both sides had chances to win the game, Rafa Silva engaged on a solo run before seeing his effort saved by Gianluigi Donnarumma. Neymar rattled the crossbar with an overhead kick.

In the end though, both sides maintain their unbeaten status.

Elsewhere, Jude Bellingham starred as Borussia Dortmund put one foot in the Champions League knockout stages with a 4-1 victory at Sevilla.

The 19-year-old stand-in skipper set up Raphael Guerreiro's opener after six minutes, albeit still requiring a classy clip over Yassine Bounou from the Dortmund full-back.

Bellingham doubled the lead four minutes before the break when he turned a defender in the box before toe-poking home with impudent ease. Within two minutes it was three when Youssoufa Moukoko set up Karim Adeyemi to slot a third.

Five minutes into the second half Youssef En-Nesyri headed home a corner to give Sevilla hope and, just like when 1-0 down, had a number of chances but could not put them away as Moukoko got his second assist setting up Julian Brandt to head home with a delightful cross.

The win puts Dortmund clear in second place behind Manchester City with six points, five ahead of tonight's opponents, for which the game was an unhappy farewell for coach Julen Lopetegui.