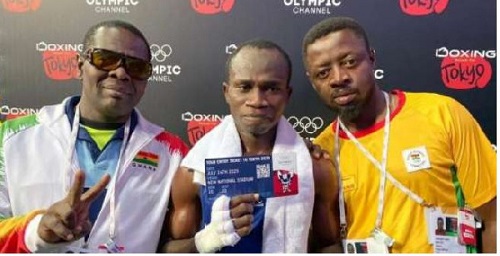 Suleman Tetteh, the Captain of the national boxing team, the Black Bomber was at his best on Friday as he punched his way to qualify for the 2020 Olympic Games to be held in Japan in July.

He defeated Kenosi Keamogetse Sadie of Mozambique 4-1 in the Flyweight division, to secure Ghanaâ€™s first slot for boxing at Tokyo 2020.

He is the first Ghanaian boxer to book a ticket to the games, after a disappointing outing on Thursday, when he failed to book a place in the finals of the competition.

Tetteh, would be making another appearance at the Olympic Games after participating in the London 2012 Games.

The remaining boxers are Samuel Takyi, Jessie Lartey and Shakul Samed would take their turn to search for another ticket for Ghana.

All five members of the Black Bombers who reached the semi-finals stage of the 2020 Olympic Games Qualifiers in Dakar, Senegal failed to make it to the finals of the competition.

Dr. Sathoud missed the direct qualification when she lost 0-5 to Gramane Rady Adosinda of Mozambique in the middleweight division, whilst new sensational featherweight boxer, 19-year-old Samuel Tackie lost 1-4 to Mulenga Everisto from Zambia.

Jessie Lartey lost 0-5 to another Zambian, Stephen Zimba in the welterweight division, while Sulemanu Tetteh, the Captain also missed the finals by losing 0-5 to Fliss Mohammed of Algeria in the flyweight division.

Shakul Samed could not make it to final as he was beaten by Egyptian, Salah Orsbi 2-3 in the Light Heavyweight division.

Meanwhile, Tetteh, Takyi Samed and Lartey would be presented with another opportunity to qualify by vying for a place in the losersâ€™ round-up.