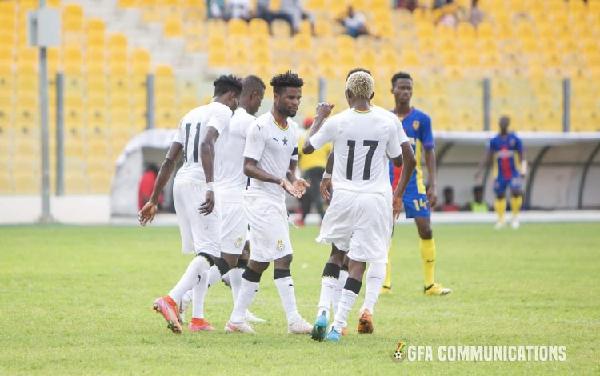 Goals from Afriyie Barnie and Ibrahim Moro aided the Black Galaxies in dispatching second Division side, Accra Five Stars FC 3-0 in a friendly match at the Accra Sports Stadium.

The Black Galaxies were too strong for the lower tier side who proved a hard nut to crack in the first half with the likes Ibrahim Imoro, Afriyie Barnieh, Konadu Yiadom and Agyenim Boateng controlling affairs.

Afriyie Barnie who captained the team opened the scoring on the 30th minute mark as he connected a well tailored pass from Imoro Ibrahim to burry calmly.

Maxwell Abbey Quaye was later fouled in the penalty box to give the Black Galaxies a penalty which was burried by Afriyie Barnie for his second of the day.

Ibrahim Imoro added the third from a freekick to give the Black Galaxies a 3-0 victory.

The team will continue camping at the Ghana Soccer Center of Excellence, Prampram ahead of the crucial 2023 CHAN qualifying match against Benin later this Month.