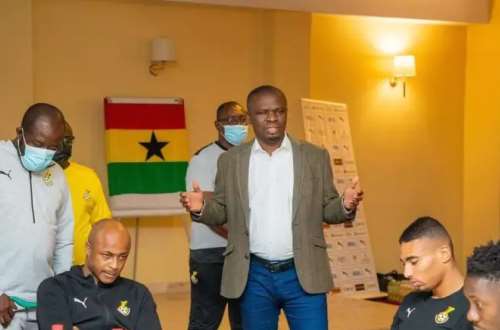 Sports Minister Mustapha Ussif has revealed Ghana made $90,000 from the friendly match against Brazil in France in September.

.According to the Sports Minister, Brazil made a take-it-or-leave-it offer which the GFA accepted.

He believes Ghana could have gotten more but due to the short notice and the five-time World Cup champions having other African nations lined up as plan B., GFA quickly accepted the terms Brazil offered.

READ ALSO: I made a mistake - Otto Addo after Brazil defeat

"Per the agreement I have sighted Brazil paid the Ghana Football Association $90,000 for the friendly match. We could have gotten more but because it was very short,  Brazil had a lot of African nations to play and because it was short notice you either take it or leave., and Ghana too needed the game," the Yagaba-Kubore lawmaker revealed this in an interview with Joysports on Saturday, November 12, 2002.

As part of preparations for the World Cup 2022, Brazil and Ghana engaged in a friendly to keep shape ahead of the tournament.

The South American side however made a light meal of the African nation with a 3-0 victory at the Stade Oceane Le Havre in France.

The Black Stars conceded three goals in the first half with Tottenham striker Richarlison netting a brace, while Marquinhos added another one.

Meanwhile, Ghana will spend a little over US$14 million on the Black Stars should they reach the semi-finals of the World Cup 2022.

This has been confirmed by Sports Minister Mustapha Ussif in his address to Parliament on November 4.

“Our group stage appearance will cost us an estimated US$8,166, 200. With our sights firmly fixed on progressing through the knockout stages, I am delighted to give you more good news," the Yagaba-Kubore lawmaker said.

Black Stars coach Otto Addo will announce his squad for the tournament on Monday, November 14.