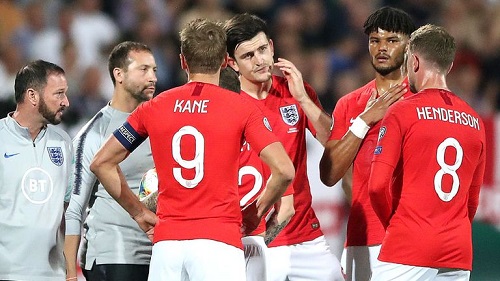 Bulgaria have been ordered by UEFA to play their next home international match behind closed doors after the racism storm that engulfed the national side following their recent Euro 2020 qualifier against England, with a second fixture potentially to follow should the behaviour of fans not improve.

The fixture was twice stopped by referee Ivan Bebek and would have been abandoned had the official been forced to intervene again.

Nevertheless, Bulgaria were summoned by UEFA to answer for their fans, with European football's governing body issuing the following statement on Tuesday: "The Bulgarian Football Union [is] to play behind closed doors the next two matches that will be played by its A representative team as host association in a UEFA competition, the second of which being suspended during a probationary period of two years as from the date of the present decision, for the racist behaviour of its supporters.

"UEFA orders the Bulgarian Football Union to implement the following directive in the next two UEFA competition matches which the association will play as the host association: to display a banner with the wording “NO TO RACISM”, with the UEFA logo on it.

"UEFA fines the Bulgarian Football Union €75,000 for the racist behaviour of its supporters and the throwing of objects."

President of European football's governing body, Aleksander Ceferin, pledged to "wage war on racists" after the game, while president of the Bulgaria Football Union (BFU), Borislav Mihaylov, and Bulgaria manager Krasimir Balakov resigned, with the latter initially courting controversy as he claimed he did not hear or see the supporters' misbehaviour before later apologising on their behalf.

The actions of the Bulgarian fans led to strong comments from many England players, including Liverpool's Jordan Henderson, who said: "I obviously wasn’t happy with the situation that we were in, it wasn’t nice to be involved in and it shouldn’t be happening in 2019, it is very disappointing.

"So we spoke together and the decision was that we carried on because if you leave the pitch and stop the game they win, really.

“That is how we looked at it and what the message was in the dressing room at half-time. We wanted to go out in the second half and make them suffer and make their team suffer on the pitch and I think we did that.”

Bulgaria are bottom of Euro 2020 qualifying Group A, while England are closing in on qualification, topping the pool on 15 points from six matches.