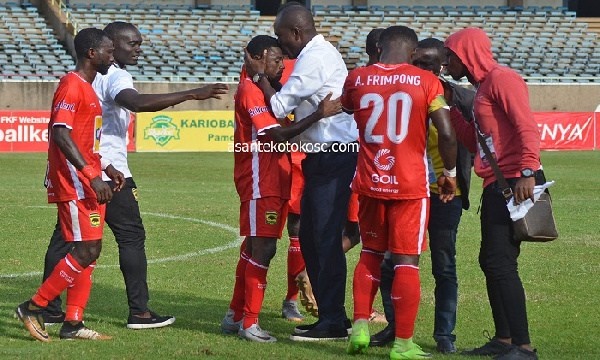 C.K Akonnor has heaped praises on his charges after Asante Kotoko's surprise 3-2 win over Coton Sport on Sunday in Cameroon.

The Porcupine Warriors recorded a 3-2 away victory over the 2008 champions league finalist in the first leg of the final knockout stage of the Confederation Cup.

The win sees the Ghanaian giants take a massive advantage in the CAF Confederation Cup playoff round with the second leg to be played in Kumasi.

However, C.K Akonnor, who is the technical brain behind the victory has described his players character as "great" and saluted them for their incredible performance.

Akonnor who has come under pressure ahead of the game prefers to direct all the praises to his players in an interview with the media after the game.

"Coton Sport are a very good side. There is no doubt about that. The fact that we've come here (Cameroon) to win doesn't mean they're a weaker side. We watched their previous games. They were in the finals of the champions league. So you can't say they're a bad side."

"We gave them a lot of respect because they haven't loss matches especially in their home games. So for us to come here and record a victory I think its laudable. It's something that we need to praise our players but we've our last game to go and therefore we need to focus on that match," he ended.

Kotoko returns home for the second leg which is slated on January, 20 at the Baba Yara Stadium very high on confidence as they look to secure qualification to the group stage of the Confederation Cup.
Latest Sports News in Ghana