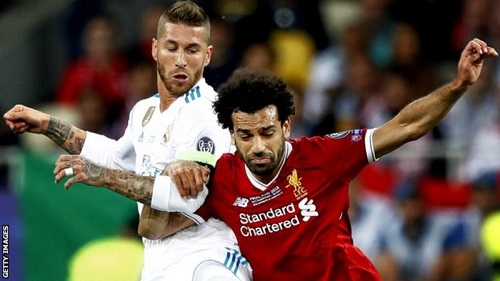 The match is scheduled for a 7:00 pm kick-off as Jurgen Klopp's Liverpool are playing the first leg at home against the 13-time winners of the competition.

The duel will be a tough one as the two clubs have a history dating back to the 2018 final where Real Madrid triumph on the night to win their 13th European title.

Mohamed Salah lasted only 30 minutes when he suffered a shoulder injury after a tussle with Sergio Ramos which many Liverpool fans believed the Eygptian injury played a major influence in the game.

Real went on to win 3-1 thanks to two howlers from goalkeeper Loris Karius, two goals from Gareth Bale and one from Karim Benzema.

Ramos this time around will not be taking part in the game as he has been ruled out with an injury.

The two sides have 180 minutes or more in the two legs to see who make it into the next stage of the competition. The second leg will be played next week Wednesday.

Will it be a repeat for Real Madrid or revenge for Liverpool?

Manchester City have no new injuries to report, while Dortmund are still without former City youth player Jadon Sancho who is sidelined with a muscle injury.

Dortmund are also without defender Dan-Axel Zagadou, who has a knee injury, while forward Youssoufa Moukoko has been ruled out for the season with a foot injury.