Chelsea ease past Brighton as Wolves earn win at Sheffield 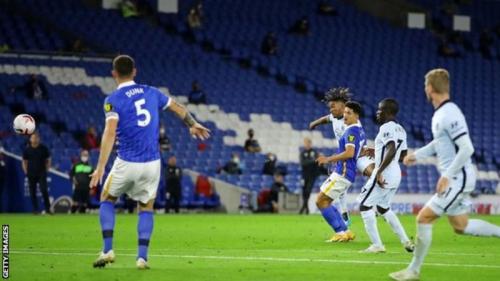 Timo Werner won a penalty on his Chelsea debut as second-half goals from Reece James and Kurt Zouma ensured they began the Premier League season with a 3-1 win at Brighton and Hove Albion.

Werner and Kai Havertz, the marquee signings of a free-spending transfer window for Chelsea, were each named in a front three for the visit to the Amex Stadium.

The former was key in breaking the deadlock, which Jorginho did in the 23rd minute after Werner was brought down by Mat Ryan.

Lucas Trossard briefly restored parity but a spectacular strike from James and a fortuitous one by Zouma sealed maximum points for Frank Lampard's men.

Neither goalkeeper was troubled in the first 20 minutes before Brighton gifted Chelsea the opening goal with some careless play in their own half.

Steven Alzate conceded possession and Jorginho pounced with a well-weighted throughball to Werner, who was felled by the outstretched knee of the onrushing Ryan.

Craig Pawson showed no hesitation in pointing to the spot and Jorginho tucked away the penalty with his trademark hop on the run up as he sent Ryan the wrong way.

Alzate went closest to producing a response when his drive drew a diving stop from Kepa Arrizabalaga before Ryan had to be alert to prevent Werner beating him at his near post.

Nine minutes after the second-half restart, Brighton were level with a goal that will raise more questions about Kepa's place in the team.

The Chelsea goalkeeper allowed Trossard's effort from outside the box to sneak under his hand and into the bottom-left corner, but parity lasted just 99 seconds.

Ryan was left with no chance as James fired a ferocious long-range effort into the top-right corner, and he was similarly helpless 10 minutes later when Zouma's tame effort deflected in off Adam Webster.

Those goals were separated by Lewis Dunk spurning a great chance to equalise, however, there was little threat from Brighton after Chelsea's third.

Elsewhere, Wolverhampton Wanderers got their season off to a flying start with two goals in the first six minutes through Raul Jimenez and Romain Saiss to earn a 2-0 victory at Sheffield United in the Premier League on Monday.