Christopher Antwi-Adjei: A childhood dream on the cusp of becoming a reality 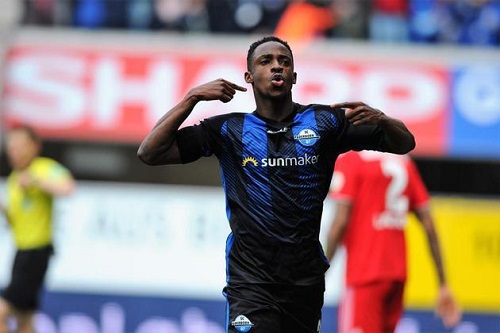 When the Black Stars dazzled the world during their maiden FIFA World Cup appearance in Germany 13 years ago, FC Paderborn’s midfielder, Christopher Antwi-Adjei was a little boy nursing his football ambitions.

Like every Ghanaian who followed the exploits of the Black Stars’ historic appearance at the 2006 World Cup, their remarkable performance left an indelible moment on the mind of then 12-year-old Chris, and it marked the beginning of a dream to one day play for the Black Stars.

Thirteen years on, after a focused and steady journey in his football career, the dream he harboured is so close to becoming a reality.

After his series of scouting missions abroad, Black Stars Coach Kwesi Appiah, handed Chris a surprise call up in his squad for November’s Afcon 2021 double-header qualifiers with South Africa and São Tomé.

Even though Chris reveals he had spoken to Kwesi Appiah a few times, he wasn’t expecting a call-up, and he got to know his invitation to the national team through a friend.

“It was a real surprise,' Chris admitted. "I had spoken to the coach quiet a few times but I did not really expect it (call up). For this call-up, a friend of mine sent me a screenshot that I had been invited to the Ghana National team,.' “I was very surprised and also very happy,” he added.

“I had a dream to play for Ghana when I was a child and this call up means a lot to me."

Chris' dream call up was nearly marred by immigration process in Germany. He got the needed clearance after the Black Stars had left for Cape Coast to prepare for South Africa, and he arrived in camp on the morning of the South African match, meaning he wasn't available for selection due to his late arrival and lack of training with the team.

But with the paperwork sorted, Chris is now happy to be home and he is looking forward to his time with the team, especially against Sao Tome.

“Bureaucracy in Germany delayed my arrival but I’m now very happy to be here. Finally, everything is going in the right direction.”

Chris is one of eight debutants in the team, and he has been amazed by the warm reception he has had so far in the team.

“The team has welcomed me well since I joined them in camp and I am quite impressed.”

“There is great bonding and they make me feel at home”

The singing, the prayers and the support

After just a few days in the team, Chris has been fascinated by three things he has noticed; singing (Jama) by the team, praying and the manner in which the team has been received by fans.

“A lot of things are really fascinating which I have noticed. The first thing I noticed is that the team prays together before everything. This is something new for me because in Germany players do their individual prayers before games and other things, but here, it is done together. It is good because I think it brings everyone close for a common goal.”

“I also like the singing (jama) in the bus and in the dressing room.”

“It’s something new for me with a football team. It’s a whole new experience and I must say that the vibe, the energy and the way they do it (sing) is just amazing for me. I believe the singing energizes the team.”

And having joined the Black Stars a few hours to South Africa, Chris was stunned by the electric atmosphere which welcomed the Black Stars to the stadium, as well as the energetic support for the team. "The support was just amazing. Right from the arrival of the team bus at the stadium and throughout the match. It told me that Ghanaians have a certain mentality towards their national team. The support was just crazy.".

Dream debut Having bonded well and having trained with his colleagues in Accra and Sao Tome, Chris is now looking forward to making what he describes as a dream debut, should Kwesi Appiah call on him in São Tomé.

“Getting the call up is one dream, and playing is the ultimate. It will be a dream come true for me to wear the Ghana shirt,”. said Chris.

“The game against South Africa was a good game and my mates did very well. Our focus now is to play very well again and get a good result in our next game. If I get the opportunity against São Tomé, I also will do my best to help the team achieve its goal."

Coach Kwesi Appiah has made one aspect of Christopher Antwi-Adjei"s dream possible by inviting him. In the next few hours, Chris will know whether he will make his dream debit here in Sao Tome to achieve his ultimate dream.