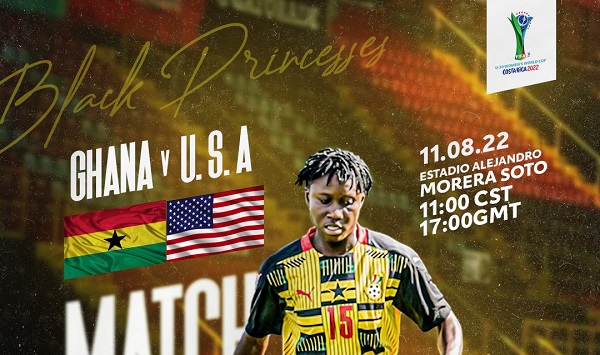 The Black Princesses will open their world cup campaign against the United State of America later today.

The clash is expected to come off at the Estadio Alejandro Morera at 17:00 GMT.

The Black Princesses will later battle Japan and the Netherlands in the other matches.

Captain of the Black Princesses, Evelyn Badu may miss the FIFA U-20 Women’s World Cup after sustaining an ankle injury in the team's training in Costa Rica ahead of the Group D opener against USA.

The Avaldnes midfielder is currently in POP awaiting scan results to confirm the extent of injury to the ankle.

Speaking ahead of the Group D opener against USA, head coach Ben Fokuo said his outfit is taking one game at a time and they will put in a shift to reach the knockout round for the first time.

"Our other opponents are good sides and we will take it game after game and go pass the group stage. Our first game is very important and we need to do our best to get a good result.

We haven’t made it past the group stage and we need to work on that in our sixth appearance and I know the players and technical team are working hard to make sure we at least, progress from the group stage."

General Captain of the Black Princesses, Mukarama Abdulai is hopeful of the team having a good campaign at the FIFA U-20 Women’s World Cup in Costa Rica.

"The mood in camp has been very good and I think everyone is keeping their focus individually and as a team. I think the girls are ready and marking time till Thursday to go and do what our technical team has taught us. The mood is great and we are encouraging each other to stay positive’’ she said.

‘’Expectations are always high but we will be taking it game after game and how to approach it. I feel like the first game is always important since it is the first step so our focus now is on the first game.

‘’We know expectations are high from Ghanaians and everyone supporting us and we are also going to do well to get a positive result.

‘’My target as a player is to do well and help the team reach far. But the team target and goal always come first before individual target. Target for the team is to play well and get the chances to score and move forward in the competition.’’ Mukarama added.