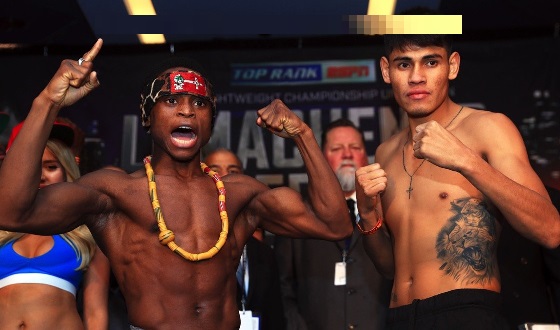 Former World Boxing Organisation (WBO) super bantamweight champion, Isaac “Royal Storm” Dogboe, has warned Emanuel Navarrete to choose his words right ahead of their crunch rematch at the Convention Centre in Tucson, Arizona, on May 11.

The 24-year-old Ghanaian advised the Mexican to be mindful of his utterances as he was in the best of conditions to avenge his painful defeat in their maiden fight last December.

Having lost to Navarrete in an upset in New York, Dogboe (20-1, 14 KOs) has pitched camp at Keta in the Volta Region and is preparing feverishly since the activation of an immediate rematch clause in the contract.

Dogboe has been in training camp since arriving in the country from the United Kingdom with the aim of coming back stronger against the Mexican pugilist on May 11.

Dogboe vs Navarette 2: How do they compare

In an interview with the Graphic Sports at his training base at Keta last Tuesday, Dogboe laughed off claims by Navarrete that he would knock him out in their scheduled rematch and stated that the Mexican fighter failed to achieve that when he was unfit.

He asked how Navarrete could stop him when he was much fit and having the best of training camp. Dogboe called on his opponent to expect a different and much dangerous fighter in their second bout.

“He must be careful in choosing his words because he couldn’t stop me when I was unfit so why does he think he can achieve that now? I just want to sound a warning to him to expect a much fit and dangerous boxer in our second fight. He should know that I am coming for my title and nothing else,” he said.

Meanwhile, Navarrete (26-1, 22 KOs) is hopeful of making a successful title defence against Dogboe and told ESPN Deportes in an interview that his chances of knocking the Ghanaian out would be greater than it was last December when the fight travelled the entire distance. He explained that the Ghanaian’s desire to come after him in the upcoming bout would be to his advantage in the rematch.

"In the first fight with Dogboe, I think he was confident because maybe he saw me and felt that I'm not really a fighter but nobody looks at my body as being that of a boxer because I do not look like that, but I feel very strong. I feel like that affected him a lot, when he could not hurt me and he started to decline.

"In the next fight, I think Dogboe will come in with more desire, he will want to make it more of a fight, but that is my comfort zone. They come to me and I take them in. I feel better when they come to me because I make them fail and I take advantage. I'm not saying it's going to be easy, because he's a good puncher, he's tough. It's going to be difficult, but I think I will have a better chance of knocking him out," he said.