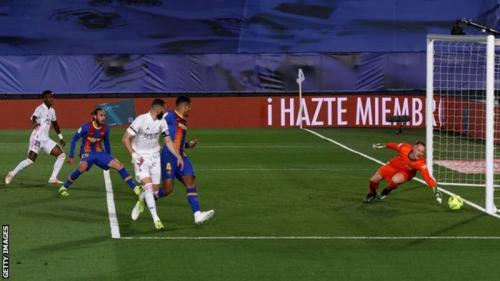 Real Madrid edged an exhilarating Clasico encounter to claim a 2-1 win over Barcelona and move ahead of Atletico Madrid at the top of La Liga.

Just two points divided the two rivals before kick off with Atletiâ€™s recent stuttering form allowing Barca and Real Madrid to make up ground, but it was the former who gave their championship chances a serious boost.

It took Real Madrid just 13 minutes to break the deadlock with Benzema flicking home a wonderful finish following a counter attacking move that involved Fede Valverde and Lucaz Vazquez down the right wing.

And the hosts doubled their advantage before the half hour mark when a Toni Kroos freekick from the edge of the penalty area was deflected off Sergino Dest and Jordi Alba on its win into the net.

Fede Valverde came close to scoring a third, smashing a strike off the inside of the far post, before Lionel Messi also struck the woodwork straight from a corner kick that looped over Thibaut Courtois.

Torrential rain made the second half challenging for both sides, but Barcelona gained a foothold in the match through Oscar Mingueza who diverted a Alba cross from the byline into the net off his shin.

Real Madrid struck the woodwork once more via a deflection off Mingueza while Casemiro was shown two quickfire yellow cards as Barca pressed for an equaliser that ultimately never came, although Ilaix Moriba struck the bar with the final chance.

The result sees Real Madrid draw level with Atletico Madrid on points in the table with their superior head-to-head record moving them top. Barca, however, remain one point off the pace.