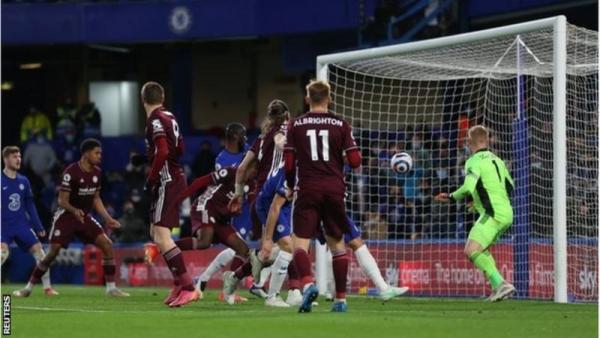 Chelsea gained some measure of revenge for their FA Cup final defeat by leapfrogging Leicester City into third spot with a 2-1 victory that puts Thomas Tuchelâ€™s men firmly in the driving seat in the battle to finish in the Champions League places.

The hosts dominated throughout a one-sided first half but couldnâ€™t find the breakthrough. Once again Kasper Schmeichel made some excellent saves while Timo Werner had two goals correctly disallowed for offside and handball respectively.

The German felt he should have had a penalty too, but referee Mike Dean gave a free kick the other way and it was not overruled by VAR despite there being clear contact from Wembley goal-hero, Youri Tielemans.

Chelsea were highly frustrated but finally got the goal they deserved when Antonio Rudiger bundled in Ben Chilwellâ€™s right-wing corner on 47 minutes.

The Blues then doubled their advantage past the hour when VAR worked in their favour with a penalty award for a trip on Werner that Jorginho confidently converted.

Leicester had barely threatened but grabbed a lifeline 14 minutes from time when substitute Kelechi Iheanacho coolly fired home after Chelsea were caught playing out from the back.

Tuchelâ€™s side held on to move up to third place on 67 points with a game to play. Leicester are a point further back in fourth, but will be anxiously monitoring fifth-placed Liverpoolâ€™s result at Burnley on Wednesday.

The Merseysiders are on 63 points but a win at Turf Moor would edge them above the Foxes on goal difference heading into the final Premier League fixtures on Sunday.

Meanwhile, Brighton fought back from 2-0 to beat the new Premier League champions Manchester City 3-2 in a brilliant game in front of returning fans at the Amex Stadium.
The visitors made an electric start as Ilkay Gundogan headed home Riyad Mahrez's whipped cross inside two minutes.

But the Seagulls looked desperate to put on a show for 8000 returning supporters, and they had plenty to celebrate when Joao Cancelo was dismissed for bringing down Danny Welbeck as the striker bore down on goal.

Pep GuardiolaÂ´s quality side remained staunch in defence as Brighton piled on the pressure, and the hosts were hurt when Welbeck was forced off with an injury.
But both teams were resolute in defence and went in at the break with little to separate them.
The second 45 kicked off to another lightning start as the brilliant Phil Foden carried the ball all of 40 yards before finding the net for CityÂ´s second.

But Brighton were straight back in it as substitute Leandro Trossard scored sixty second later with another brilliant goal after bamboozling four City defenders in the box before finally lashing past Ederson.

The Seagulls were dominant and pushed for an equaliser that would send the fans into delirium, and it came 20 minutes from time as Adam Webster scored his first ever goal at the Amex to put Brighton level against the champions.

Then, to the disbelief of those in the ground, Brighton took the lead through Dan Burn, poking home his first goal for the club in three years with just ten minutes to go.

The lead was deserved and the comeback was emphatic in front of the returning fans, and Brighton held on for their first league win over City for 40 years.