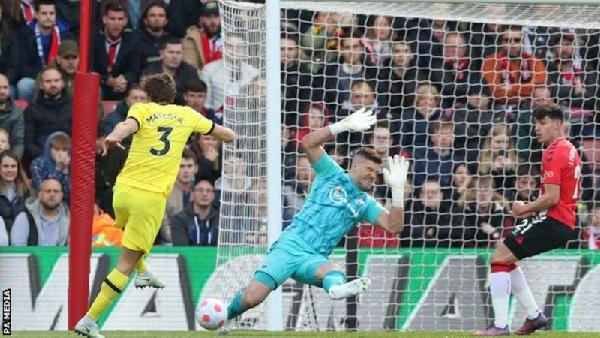 Chelsea put a terrible week behind them to return to winning ways in devastating style with a six-goal demolition of Southampton.

Having been beaten 4-1 at home to Brentford in the Premier League and then suffering a 3-1 defeat to Real Madrid, Chelsea bounced back in a manner that will give Thomas Tuchel encouragement his side can salvage their Champions League tie in Spain next week.

Tuchel said before kick-off that "things are upside down" after two damaging results but his players responded by hitting the woodwork three times and scoring four in an astonishing first half at St Mary's Stadium.

Timo Werner hit the post and then headed against the bar inside the opening seven minutes before Marcos Alonso fired the visitors ahead after Mason Mount's assist.

England midfielder Mount's clean finish from outside the box doubled the lead and then Werner was thwarted by Fraser Forster's fine save as Southampton unravelled in front of their own fans.

Werner was soon celebrating his first Premier League goal for six months after bursting through and finishing before Kai Havertz made it 4-0 with a tap-in after Germany team-mate Werner hit the woodwork for a third time.

Southampton were blown away and it required a remarkable one-handed stop by Forster to prevent an own goal by Mohammed Salisu before half-time.

However, the Saints did concede a fifth in the 49th minute, Werner tapping home his second after N'Golo Kante had been thwarted.

Mount made it six from close range on an embarrassing afternoon for Ralph Hasenhuttl and his Southampton players.

Over at the Emirates, Brighton downed Arsenal who fell to their second successive defeat, putting the race for a top-four spot in the Premier League out of their hands.

Enock Mwepu set up Leandro Trossard for the first and then scored the second to seal the game.

The opener came just before the half-hour mark when Mwepu got behind the space left by makeshift left back Granit Xhaka and from the by-line picked out Trossard who coolly side-footed home into the top right-hand corner.

Midway through the second half, Moises Caicedo dribbled deep in the Arsenal area before clipping a ball back to the edge of the box which Mwepu met on the half-volley with an unerring low finish.

Arsenal were given hope a minute from time when, less than 60 seconds after hitting the bar from a free kick - and Eddie Nketiah smashing the follow up against the woodwork - Martin Odegaard's effort from 30 yards was deflected off Danny Welbeck and flew over the head of Robert Sanchez.

In-between Arsenal had a goal ruled out by VAR when Gabriel Martinelli headed home from a yard out.

The result leaves the Gunners, who fell to a 3-0 defeat at Crystal Palace on Monday, behind their North London rivals Tottenham.

Brighton, who snapped a run of six defeats and a draw in seven games, rise to 11th spot.