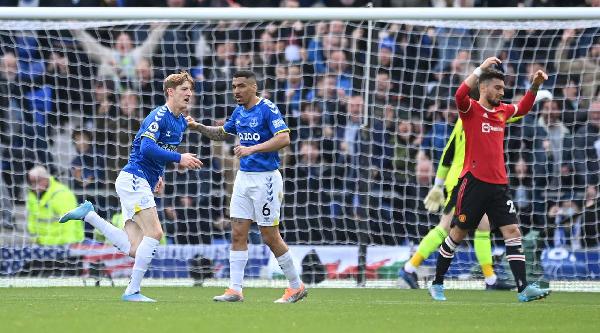 Manchester United's wretched season continued after suffering a 1-0 defeat away to Everton who move four points clear of the relegation zone.

If Erik ten Hag, who has emerged as United's chosen candidate to lead the club, was watching he would have been tempted to switch over to the Dutch version of Homes Under The Hammer after witnessing the offering at Goodison Park.

Ralf Rangnick, who welcomed back Cristiano Ronaldo, saw his side create some good early chances with Marcus Rashford denied twice by good saves from Jordon Pickford.

But the home side showed more energy and effort and took the lead in fortunate circumstances when Anthony Gordon's strike from outside the box took a massive deflection off Harry Maguire and wrong-footed David De Gea.

United's scrappy passing, lack of a system and reliance on a piece of Ronaldo magic continued as they offered little after falling behind.

Frank Lampard's side continued to show more effort in the second period and defended for their lives.

The visitors did not commit enough players into the box despite bringing on Anthony Elanga and Juan Mata and opted for a series of short corners - against a side vulnerable to conceding from set pieces - as they succumbed to another tepid defeat.
The result leaves Rangnick's side seventh while 17th-placed Everton move four points ahead of Burnley, who play Norwich City on Sunday.