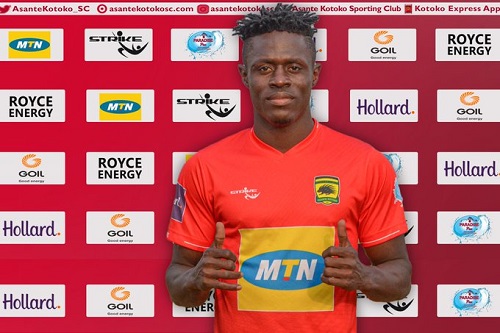 Former Asante Kotoko striker Eric Bekoe has revealed that he has set a target for the new Porcupines poacher Kwame Opoku.

Kotoko secured the signing of the new striker from Nkoranza Warrior in February on a 3-year deal.Â The 21-year-old bagged ten goals for Nkoranza Warriors in the Ghana Football Association Normalisation Committee Special Competition.

The striker is expected to help sharpen Maxwell Konadu's attack when the league resumes after the Covid-19 pandemic.

He has not kicked a ball due to the Covid-19 that have led to the suspension of the 2019/20 Ghana Premier League.

Even before he will kick a ball,Â Bekoe who played for the Ghana Premier League record-holders between 2007 to 2008 where he impressively netted 42 goals in 48 appearances in all competitions has challenged him to surpass his record.Â

â€œI have watched some videos of Kwame Opoku and I am communicating with him. I have given him a target because I want a player who will beat my Kotoko recordâ€, Eric Bekoe told Vision 1 FM.

â€œI even told him to wear my favorite number 42 jersey because it has been abandoned for a long time. Per his video, I think he needs some finishing touches.â€

Meanwhile, Maxwell Konadu has hailed the capture of his new acquisition Kwame Opoku. According to the coach, Kwame Opoku is the type of striker always the club have been searching for.