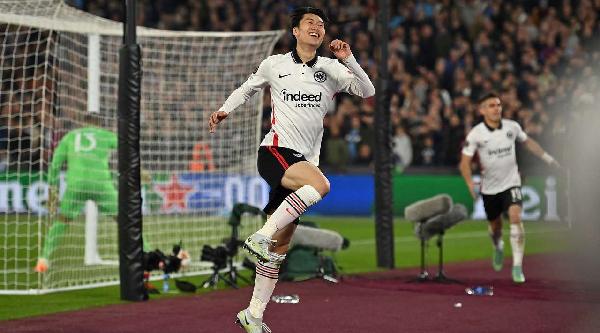 West Ham face an uphill battle to reach the Europa League final after slumping to a 2-1 defeat in their first leg clash with Eintracht Frankfurt at the London Stadium.

The Hammers were playing in their first European semi final for 46 years but made the worst possible start as Ansgar Knauff nodded the visitors ahead inside 50 seconds.

David Moyes’s men responded well to the setback and after Jarrod Bowen hit the post the home side levelled on 21 minutes through a well-worked set piece. Michail Antonio got the final touch as he prodded home Kurt Zouma’s header to net his 11th goal of the season.

West Ham appeared to have got back on track but it was the away team who looked the more threatening after the interval and they deservedly regained the lead on 54 minutes.

Alphonse Areola made a smart save to stop Djibril Sow from finishing off a superb move but he could not prevent Daichi Kamada from tucking in the rebound.

Substitute Said Benrahma went close to snaring another equaliser with a shot from distance while Kamada was a whisker away from grabbing a third for Oliver Glasner’s men, who looked the more composed throughout.

Bowen almost saved the day with a stunning overhead kick but it came crashing back off the crossbar in stoppage time to leave the Hammers with it all to do in Germany next  Thursday.

Elsewhere, A late Angelino wonder strike gave Leipzig a crucial 1-0 win over Rangers in the first leg of their Europa League semi-final tie.