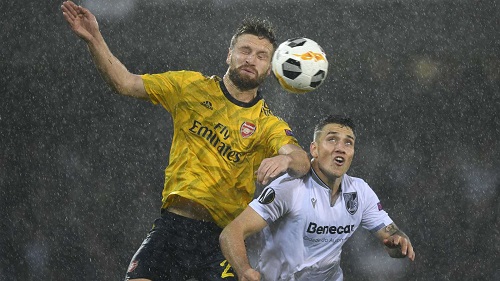 An injury-time equaliser from Bruno Duarte sealed a 1-1 draw for Vitoria SC against Arsenal on Wednesday and stopped the Gunners from qualifying for the last 32 of the Europa League.

The visitors looked set to claim a win that would have guaranteed their place in the knockouts when Shkodran Mustafi headed in Nicolas Pepe's free-kick 10 minutes from time.

However, Duarte's acrobatic finish denied Unai Emery's side from a fourth win in as many European games this season and means they must wait a little longer to secure a place in the next round.

It was nearly much worse for Arsenal, who saw Mustafi deflect a cross onto the post before Rochinha rifled a half-volley wide in the closing moments of a rain-soaked encounter in Guimaraes.

Vitoria's Pepe blasted a shot off the post with eight minutes gone and Emiliano Martinez made a smart one-handed save to deny Marcus Edwards from just outside the box, as the hosts set about trying to test the Arsenal keeper in the wet conditions.

Martinez was again called into action to parry Edmond Tapsoba's header away before Rob Holding missed the best of Arsenal's early chances by nodding over Bukayo Saka's cross.

Davidson curled a shot just wide of the right-hand post as Vitoria continued to threaten, with Edwards failing to make the most of a promising run into the box early in the second half.

The Gunners suffered a blow when Dani Ceballos pulled up with an apparent hamstring problem, with Matteo Guendouzi brought on to replace him, but the change actually sparked the visitors into taking control of proceedings, even if goalscoring chances eluded them.

That was until the 80th minute, when Mustafi rose unmarked to head Nicolas Pepe's free-kick into the bottom-left corner and celebrated what looked set to be the winner.

However, Duarte snatched an equaliser with a fine bicycle kick from six yards out and Vitoria were unlucky not to snatch a winner, with Mustafi deflecting the ball on to the base of the right-hand post before Rochinha's clever volley missed Martinez's goal by a few inches.