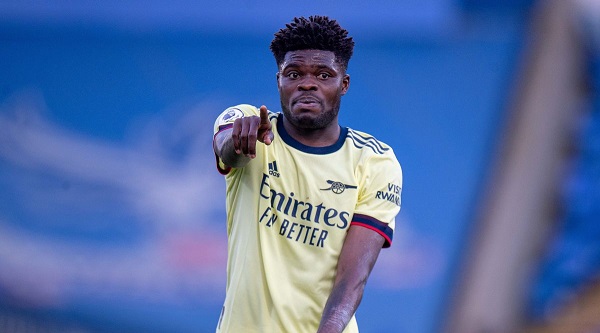 Deputy Black Stars captain Thomas Partey will be out of action for some weeks after picking up an injury on Monday.

Thomas Teye Partey got injured in Arsenal's 3-0 away loss to Crystal Palace at the Selhurst Park. Due to the injury, he was unable to complete the game and had to make way for  Sambi Lokonga.

Arsenal in a statement have confirmed that after assessment and subsequent scans Thomas Partey has muscle damage to his right tight.

The club added that the midfielder will in the coming weeks see a specialist.

"Thomas Teye Partey picked up an injury in his right thigh in Arsenal’s 3-0 away defeat to Crystal Palace at the Selhurst Park on Monday, a club statement said.

The Ghanaian midfielder was substituted in the 75th minute by Sambi Lokonga.

Thomas has since received further assessments, and a subsequent scan has shown muscle damage to his right thigh.

We will continue to assess Thomas in the coming weeks, during which time he will also receive further specialist consultations.

Everyone will be working hard to get Thomas back on the pitch as soon as possible."