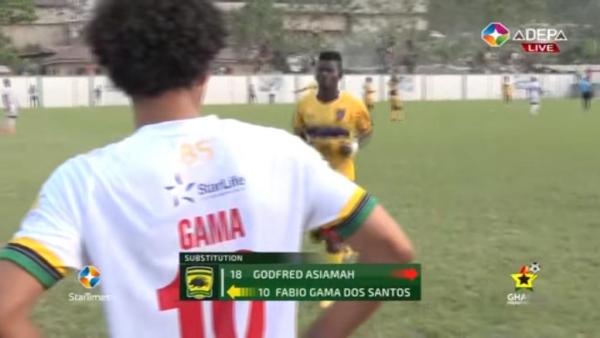 Brazilian import Fabio Gama played his first game in the domestic top-flight for Asante Kotoko in the 1-1 draw with Medeama on Sunday, in the outstanding Ghana Premier League fixture.

The Brazilian had his debut delayed due to his work permit which was obtained last week. However, the 28-year-old attacker who failed to make the starting XI was introduced in the second department of the game against the Tarkwa based side on Sunday, December 27.

The attacker climbed off the bench in the 80th minute in place of Godfred Asiamah.

After recess, Asante Kotoko upped their game in a bid to Knick it at the end of the 90 minutes. In the 75th minute, the Reds had the equalizer through striker Kwame Poku.

Unfortunately, the Porcupine Warriors could not hold on to the finish line. They conceded a penalty in the 88th minute, giving the home team a chance to earn a point.

Taking on the pressure, Mohammed Abass stepped up and scored from 12 yards to ensure Medeama SC earned a draw on the back of a 1-1 scoreline after 90 minutes.