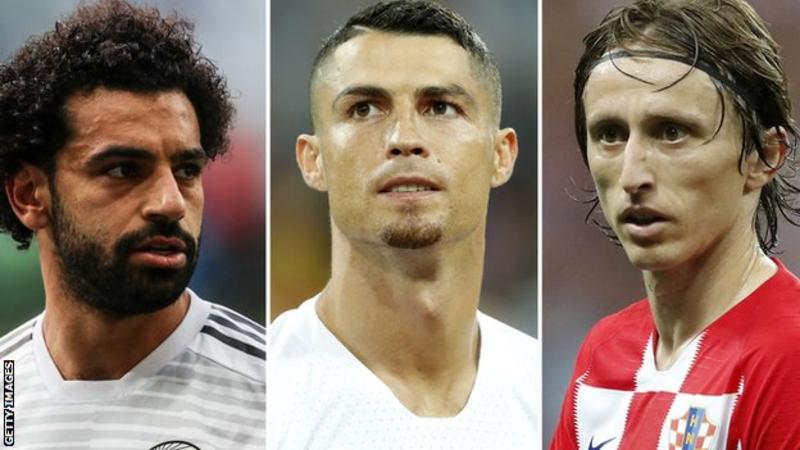 Barcelona and Argentina forward Lionel Messi, a five-time Ballon d'Or winner, missed out on a place in the top three.

There was also no place for any member of France's World Cup winning squad.

Portugal winger Ronaldo, the 2016 and 2017 winner, won a fifth Champions League title with Real Madrid in May before joining Juventus for £99.2m.

Real midfielder Luka Modric was named the World Cup 2018's player of the tournament as Croatia reached the final against France.

Modric beat Ronaldo and Salah to win the Uefa Men's Player of the Year last week.

England striker Harry Kane, who won the World Cup Golden Boot and was on the original 10-man shortlist, has also missed out.

Didier Deschamps, who led France to the World Cup, is nominated for coach of the year, alongside Croatia's Zlatko Dalic and former Real Madrid boss Zinedine Zidane.

The awards are separate to the Ballon d'Or, after world football's governing body ended its association with that honour in 2016.

A panel of Fifa legends and experts drew up 10-man shortlists for each award and a jury consisting of national team captains, coaches, selected journalists and fans choose the winner, each group accounting for 25% of the vote.

The winners will be announced on 24 September at Royal Festival Hall in London.
Men's player