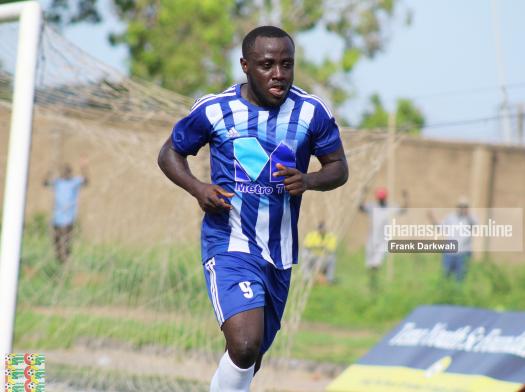 Former Great Olympics striker Abel Manomey is questioning why the Ghana Premier League has been cancelled amid difficulties club owners and footballers are going through.

The striker who joined Dreams FC in April on a 2-year deal is unhappy the football season has been called off.

Abel Manomey who holds the record for most goals scored in Ghana Universities Sports Association Games (GUSA) with a total of 39 goals in 35 games has not kicked a ball since his switch to the Dawu based side due to the covid-19 pandemic which forced the league to be suspended and later cancelled.

Abel Manomey in a Facebook post has expressed sadness that the Ghana Premier League has been voided.

Manomey believes the GFA hands were forced to take such a decision.

He queried why the government has allowed other activities to go on and observe the safety protocols, why the same restrictions cannot be eased for the league to go on hence the cancellation.

The Ghana Football Association has been coerced to cancel the Football season because of covid 19.

On the other hand the government is encouraging us as citizens to register and vote on December 7th, following safety protocols, this is terrible.

People are walking freely, patronizing markets, going to church and mosque to pray for one hour but domestic-based footballers cannot continue the football season because of covid 19?

How do domestic-based footballers survive especially when most Ghana Premier League clubs cannot raise monies to pay their players when there is no league in session?

Are they thinking about the over 84,000 domestic-based footballers who are the major stakeholders of Ghana League and it effects to their living standards?

How do domestic-based footballers in Ghana survive to take care of themselves and their families at this time before the league resumes again ?

Can’t the league continue with clubs following the safety protocols before, during and after games for the safety of players and the team as a whole?

This one I cannot breathe, domestic-based footballers lives matter. I am really sad...