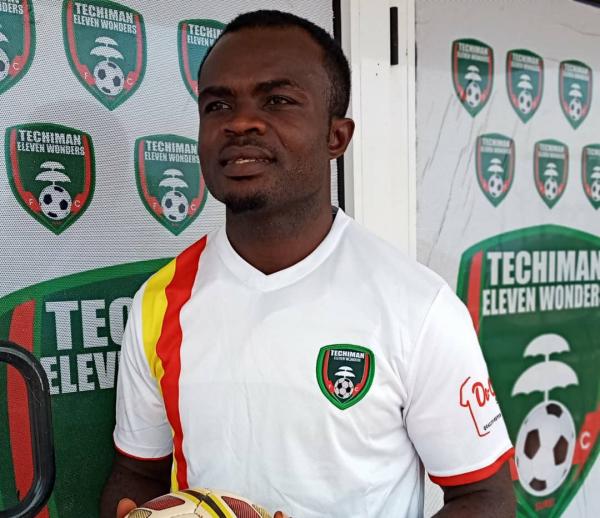 Techiman Eleven Wonders have secured the signature of former Asante Kotoko defender Amos Frimpong on a year deal, the club has announced.

The club on Friday afternoon announced that they have signed free agent Amos Frimpong who recently parted ways with Guinea side AS Khaloum Star after the expiration of his contract.

Frimpong in a recent interview said disclosed that he would love to make a return to the Ghana Premier League after leaving in 2019.

"I’m currently without a club. I would love to be back to Kotoko one day but as a non playing staff. However, I won’t rule out anything but I prefer a deal to a different club’, Frimpong said.

Frimpong joined the Guinean side from Kotoko on a two-year deal in 2019 but left after his deal expired.

The 28-year spent eight seasons with the club after moving to Asante Kotoko from B.A United in 2011 before moving to Guinean side AS Kaloum Stars in 2019.

The versatile defender rose through the ranks at the club to captain the Kumasi Based side..

He won a number of laurels including the Ghana Premier League, the FA Cup, the President Cup, and most recently the tier 1 of the Ghana Footba

Amos Frimpong joined the Porcupine Warriors from BA United on July 1, 2011, where he won a number of laurels including the Ghana Premier League, the FA Cup, the President Cup, and most recently the tier 1 of the Ghana Football Association (GFA) Normalization Committee (NC) Special Cup.

He is expected to use his experience to aid Techiman based club finish in a respectable position in the Ghana Premier League.

The club lie 15th, a place above the relegation zone in the on going league.